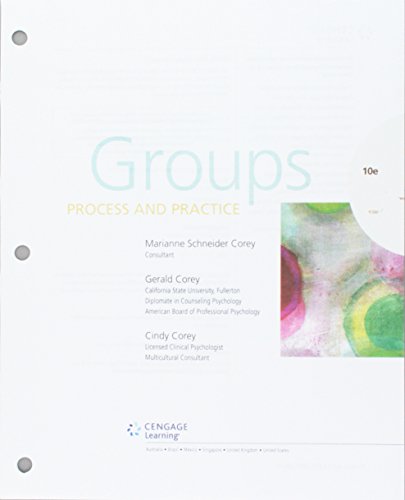 "This book outlines the basic issues and key concepts of group process and shows how group leaders can apply these concepts in working with a variety of groups. In many ways this is a 'how-to' book, but it is also a book about the 'why' of group leadership... this tenth edition...contains many subtle changes in our discussion of the topics within ech chapter, and many chapters have undergone considerable revision with new material added."--p. xvii.

Marianne Schneider Corey is a licensed marriage and family therapist in California and a National Certified Counselor. She received her master's degree in marriage, family, and child counseling from Chapman College. She is a Fellow of the Association for Specialists in Group Work and was the recipient of this organization's Eminent Career Award in 2001. She received the Lifetime Achievement Award from the American Mental Health Counselors Association in 2011, and is a member of that organization. She also holds memberships in the American Counseling Association, the American Group Psychotherapy Association, the Association for Specialists in Group Work, the Association for Multicultural Counseling and Development, the Association for Counselor Education and Supervision, and the Western Association of Counselor Education and Supervision. In the past 40 years, Marianne Schneider Corey and Jerry Corey have presented workshops in group counseling for mental health professionals at many universities in the United States as well as in Canada, Mexico, China, Hong Kong, Korea, Germany, Belgium, Scotland, England, and Ireland. In addition to GROUPS: PROCESS AND PRACTICE, Marianne has coauthored the following books, all with Cengage Learning: I NEVER KNEW I HAD A CHOICE, 11th Edition (2018, with Gerald Corey and Michelle Muratori); BECOMING A HELPER, 7th Edition (2016, with Gerald Corey); ISSUES AND ETHICS IN THE HELPING PROFESSIONS, 9th Edition (2015, with Gerald Corey, Cindy Corey, and Patrick Callanan); and GROUP TECHNIQUES, 4th Edition (2015, with Gerald Corey, Patrick Callanan, and Michael Russell).

Book Description Condition: new. Brand new US edition. If it comes with a code, the code will be included *We are unable to ship internationally*. Seller Inventory # sn4-0894a