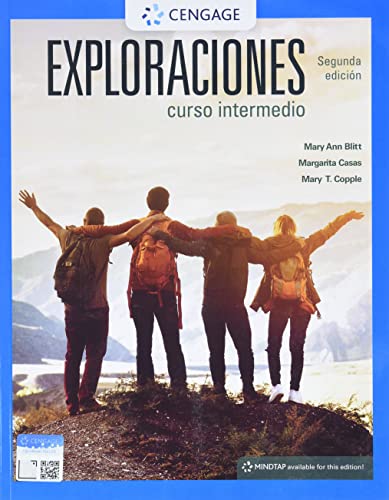 EXPLORACIONES CURSO INTERMEDIO is an engaging program that will help you build proficiency in all the language skill and communicate in many contexts. This program also includes a full suite of learning aids to help you achieve at the intermediate level, including a mobile app with online flash cards, eReader, pronunciation quizzes, and more.

Mary Ann Blitt began her Spanish studies at the age of 13 while living in Madrid, Spain. She received her B.A. in Spanish from the University of Colorado at Colorado Springs, and after spending a year studying at the Universidad de Granada, she returned to the university to obtain a teaching certificate. She later attended Colorado State University, where she received her master's degree in Spanish with interdisciplinary studies in French. After teaching Spanish and coordinating the study abroad program at Metropolitan Community College-Maple Woods in Kansas City for fourteen years, she joined the faculty at College of Charleston in 2014. Mary Ann has studied in Spain, Mexico, France, and Canada and has trained teachers of English as a Foreign Language in Asuncion, Paraguay. She is currently actively involved in professional development workshops.