Items related to Songs of a Sourdough

Songs of a Sourdough 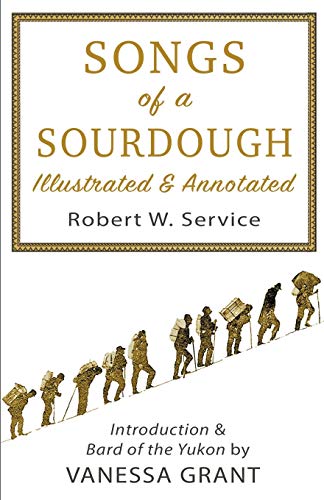 1. Songs of a Sourdough (Paperback or Softback)

2. Songs of a Sourdough (Illustrated and Annotated) (Paperback)

Book Description Muse Creations Inc, United States, 2020. Paperback. Condition: New. Annotated edition. Language: English. Brand new Book. Illustrated with sketches from Klondike gold rush photographs. * Annotated with excerpts from a 1958 Pierre Burton interview of Robert W. Service, including Vanessa Grant's childhood memory of the interview. The Bard of the Yukon Banker, Hobo, and Klondike Poet Robert William Service was born in Lancashire, Engand in 1874. His mother was an heiress and his father a bank cashier. He was the eldest of 10 children. When Service was 4 years old, he was sent to his grandfather and his 3 aunts in Scotland to live. He wrote his first poem two years later. He was, it seemed, destined to be a poet and a wanderer. In a 1958 CBC television interview, Canadian journalist Pierre Berton asked then 84 year old Robert Service why he had left Scotland and immigrated to Canada. "I wanted freedom," said Service. "I wanted adventure. I got the idea, I want to be a hobo." By the time the Klondike gold rush began, Robert Service was in San Francisco, carrying a hobo's bundle tied to his bindle stick. He used to stand in the street watching the gold prospectors marching off with their sacks, but he never dreamed of going himself. "How could I?" asked Service. "I had no money." Service wandered from California to British Columbia. He arrived in the Yukon in 1905 as a bank clerk and it was there where, surrounded by veterans of the gold rush, he began writing verses about the Yukon. His first book of verses, SONGS OF THE SOURDOUGH, was published to acclaim in 1907, and was reprinted 10 times within the first year. Before his death in 1958, he had published over 1,000 poems and 45 verse collections. The 2-room cabin in Dawson City where Robert Service lived from 1908 until his departure from the Yukon in 1912 is maintained as a Klondike National Historic Site by Parks Canada in honor of the Bard of the Yukon. Seller Inventory # APC9781393329893

3. Songs of a Sourdough (Illustrated and Annotated)

4. Songs of a Sourdough

5. Songs of a Sourdough Illustrated and Annotated