Items related to Kafka on the Shore

Murakami, Haruki Kafka on the Shore 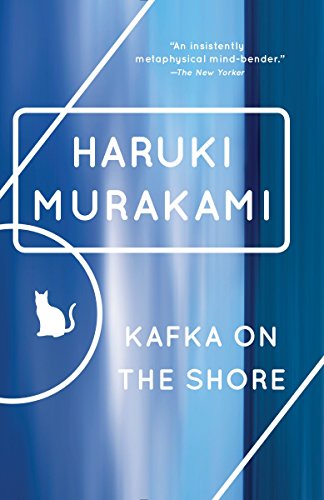 Kafka on the Shore displays one of the world’s great storytellers at the peak of his powers.

Here we meet a teenage boy, Kafka Tamura, who is on the run, and Nakata, an aging simpleton who is drawn to Kafka for reasons that he cannot fathom. As their paths converge, acclaimed author Haruki Murakami enfolds readers in a world where cats talk, fish fall from the sky, and spirits slip out of their bodies to make love or commit murder, in what is a truly remarkable journey.

The opening pages of a Haruki Murakami novel can be like the view out an airplane window onto tarmac. But at some point between page three and fifteen--it's page thirteen in Kafka On The Shore--the deceptively placid narrative lifts off, and you find yourself breaking through clouds at a tilt, no longer certain where the plane is headed or if the laws of flight even apply.

Joining the rich literature of runaways, Kafka On The Shore follows the solitary, self-disciplined schoolboy Kafka Tamura as he hops a bus from Tokyo to the randomly chosen town of Takamatsu, reminding himself at each step that he has to be "the worldąs toughest fifteen-year-old." He finds a secluded private library in which to spend his days--continuing his impressive self-education--and is befriended by a clerk and the mysteriously remote head librarian, Miss Saeki, whom he fantasizes may be his long-lost mother. Meanwhile, in a second, wilder narrative spiral, an elderly Tokyo man named Nakata veers from his calm routine by murdering a stranger. An unforgettable character, beautifully delineated by Murakami, Nakata can speak with cats but cannot read or write, nor explain the forces drawing him toward Takamatsu and the other characters.

To say that the fantastic elements of Kafka On The Shore are complicated and never fully resolved is not to suggest that the novel fails. Although it may not live up to Murakami's masterful The Wind-Up Bird Chronicle, Nakata and Kafka's fates keep the reader enthralled to the final pages, and few will complain about the loose threads at the end. --Regina Marler

With "Kafka on the Shore, Haruki Murakami gives us a novel every bit as ambitious and expansive as "The Wind-Up Bird Chronicle, which has been acclaimed both here and around the world for its uncommon ambition and achievement, and whose still-growing popularity suggests that it will be read and admired for decades to come.
This magnificent new novel has a similarly extraordinary scope and the same capacity to amaze, entertain, and bewitch the reader. A tour de force of metaphysical reality, it is powered by two remarkable characters: a teenage boy, Kafka Tamura, who runs away from home either to escape a gruesome oedipal prophecy or to search for his long-missing mother and sister; and an aging simpleton called Nakata, who never recovered from a wartime affliction and now is drawn toward Kafka for reasons that, like the most basic activities of daily life, he cannot fathom. Their odyssey, as mysterious to them as it is to us, is enriched throughout by vivid accomplices and mesmerizing events. Cats and people carry on conversations, a ghostlike pimp employs a Hegel-quoting prostitute, a forest harbors soldiers apparently unaged since World War II, and rainstorms of fish (and worse) fall from the sky. There is a brutal murder, with the identity of both victim and perpetrator a riddle-yet this, along with everything else, is eventually answered, just as the entwined destinies of Kafka and Nakata are gradually revealed, with one escaping his fate entirely and the other given a fresh start on his own.
Extravagant in its accomplishment, "Kafka on the Shore displays one of the world's truly great storytellers at the height of his powers.

Kafka on the Shore Paperback

Kafka On The Shore

Kafka on the Shore (Paperback or Softback)