Items related to The Keep 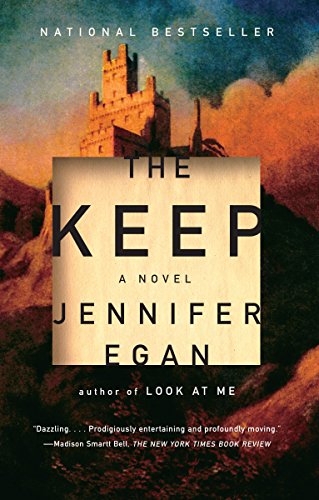 Award-winning author Jennifer Egan brilliantly conjures a world from which escape is impossible and where the keep –the tower, the last stand –is both everything worth protecting and the very thing that must be surrendered in order to survive.

Two cousins, irreversibly damaged by a childhood prank, reunite twenty years later to renovate a medieval castle in Eastern Europe. In an environment of extreme paranoia, cut off from the outside world, the men reenact the signal event of their youth, with even more catastrophic results. And as the full horror of their predicament unfolds, a prisoner, in jail for an unnamed crime, recounts an unforgettable story that seamlessly brings the crimes of the past and present into piercing relation.

Review:
In Jennifer Egan's deliciously creepy new novel, two cousins reunite twenty years after a childhood prank gone wrong changed their lives and sent them on their separate ways. "Cousin Howie," the formerly uncool, strange, and pasty ("he looked like a guy the sun wouldn't touch") cousin has become a blond, tan, and married millionaire with a generous spirit. He invites his cousin Danny (who as an insecure teenager left him hurt and helpless in a cave for three days) to help him renovate an old castle in Germany. To reveal too much would ruin the story, just know that The Keep is a wonderfully weird read--a touch experimental in terms of narrative, with a hefty dose of gothic tension and mystery--balanced by an intimate and mesmerizing look at how the past haunts us in different ways. --Daphne Durham 10 Second Interview: A Few Words with Jennifer Egan

Q: What is your writing process like? Has it differed from book to book?
A: My writing process seems to be a strange one, at least compared with other writers I've talked to. I begin with very little: usually just a strong sense of time and place--of atmosphere--and a few abstract notions that I want to explore. In the case of The Keep, I had a yen to set a book in what I'll call a gothic environment: an isolated, crumbling structure whose heyday is long past, and where eerie things begin to happen. As for the notions, I was curious about telecommunications: the way that cell phones and the Internet have made so many of us accustomed to nearly constant disembodied communication--a state traditionally associated with supernatural experience. I loved the idea of letting modern telecommunications collide with a gothic environment and seeing what would happen.

I write by hand--usually one long draft that I scribble out quickly (5-10 pages a day) and poorly. I do this almost completely from the gut, with very little sense of where I'm going. It's often in the process of this almost unconscious writing that I discover characters and action. When the first draft is done, I type it into the computer (the parts I can read anyway; I have wretched handwriting) and see what I've got. Not a word of that first draft usually makes it anywhere near the final draft--which, in the case of some chapters of Look at Me, my last novel, was sixty to seventy drafts later. I edit by hand on a hard copy, then type in the changes and print it out again for further editing. The writing itself always remains instinctive, but there is a strong analytical counterpart, when I figure out what I'm doing in terms of plot, characters, thematic underpinnings, and then scheme about how I can do it better. I save every draft until a book is done; a towering pile of paper that I eventually, joyfully, recycle.

Q: Some of the most powerful (and terrifying) moments in the book deal with claustrophobia. Are you claustrophobic?
A: I almost never write about myself, or things that have happened in my own life, or about people I know. I like to make all of it up--or at least, I think I'm making it up, until later I realize how much of my own experience has crept into my books, disguised even from me. For example: I'm not claustrophobic, but I've certainly been paranoid, and the two are closely linked. I wanted to capture the way that paranoia (like claustrophobia) can instantly turn a benign environment into an unmitigated nightmare. One question is always at the center of such experiences: is this real, or am I making it up? We live in very paranoid times. I was interested in the way paranoia can make someone turn threatening and aggressive in exactly the ways they perceive the world to be. They become the very monster they fear.

Q: What author/s have inspired you?
A: In the big, long-term ways: Lawrence Sterne, Jane Austen, Edith Wharton, Emile Zola, George Eliot, Robert Stone, Don DeLillo, Jean Rhys.
For The Keep, the list is slightly different. There are some fantastic (and totally insane) Gothic novels that I had a ball reading: Horace Walpole's The Castle of Otranto, Charles Maturin's Melmoth the Wanderer, Ann Radcliffe's The Mysteries of Udolpho, Matthew Lewis's The Monk--those are all 18th century books--and then from the 19th century, Wilkie Collins's The Woman in White, which is an absolutely drop-dead great thriller.

Jennifer Egan is the author of four novels: A Visit from the Goon Squad, The Keep, Look at Me, The Invisible Circus; and the story collection Emerald City. Her stories have been published in The New Yorker, Harper’s Magazine, GQ, Zoetrope, All-Story, and Ploughshares, and her nonfiction appears frequently in The New York Times Magazine. She lives with her husband and sons in Brooklyn.

The Keep (Paperback or Softback)