Items related to The Sultan's Harem 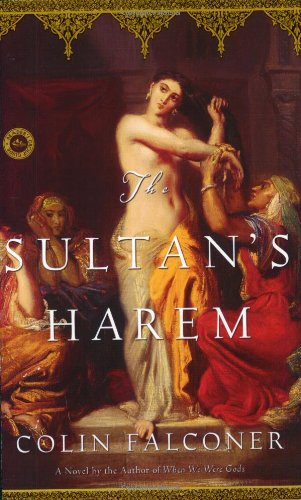 From the author of the critically acclaimed When We Were Gods comes a dramatic, unforgettable novel of cruelty and passion, set in the great Harem of the Ottoman Empire.

In Constantinople there is only one ruler: Sultan Süleyman the Magnificent, Lord of Lords of this World, Possessor of Men’s Necks, Allah’s Deputy, absolute ruler of the mighty Ottoman Empire. And at the heart of his palace is the Sultan’s vast Harem, the domain of hundreds of scented, pampered women—some wives, some concubines, some merely slaves. Among them is Gülbehar, the Sultan’s submissive favorite and mother of his heir; Julia, the daughter of an Italian lord, kidnapped when she attempted to flee Venice with her lover; and Hürrem, a Tartar girl from the Russian steppes, sold into slavery.

All three women are beautiful, but Hürrem is the most dangerous—ruthless in her desire to rule the Harem and, ultimately, Süleyman himself. Endlessly manipulative and clever, she carefully arranges the downfall of her rivals and endears herself to the Sultan, who places her at the center of the Empire’s power. It is his obsession with Hürrem—not his enemies—that in the end costs Süleyman his allies, his sons, and finally his dynasty.

Bestselling author Colin Falconer offers an irresistible glimpse into a world of intrigue, sensuality, and violence, where an empire can be controlled not by the might of its king but by the women hidden behind the Harem walls.

Colin Falconer is the author of When We Were Gods and Feathered Serpent, as well as several other historical novels that have been published throughout the world. He lives in Perth, Australia.

Silence, but for the steady rhythm of the rain, splashing into blood-stained pools, dripping from the eaves of the tents. Camels and men trudged through the mud; even the nostrils of the beasts of burden twitched at the stench of sick men and poor sanitation, but most of all at the reek of the moat.

The moat around the fortress was sixty feet deep and one hundred and forty feet wide, and in places it had been almost filled with the bloated bodies of the dead. The smell of putrefying corpses pervaded everything, seeping into clothes and hair and skin, pungent even in the silken sanctum of the Sultan's tent itself, despite the incense burners and the perfumed handkerchiefs that the assembled generals held to their noses.

The young man who sat with his legs astride the mother-of-pearl and tortoiseshell throne looked like a panther poised to spring. His lips were drawn back from his teeth in a snarl as he listened to the mumbled obeisance of his second vizier. His long artist's fingers curled and uncurled into claws, the face below the silken turban pale with rage.

"How many of your Sultan's men did you lose today?" he hissed, referring to himself, as he always did in public, as if he were some other person.

The second vizier's face was blackened with dried blood from a sword slash on his forehead. It had dried and crusted in his black beard, where it glowed, dully, like a thousand small rubies. Half a dozen times that day he had led the charge to the breach in the wall below the towers of St. Michael and St. John, while the grizzled old veterans of the Cross slashed down his azabs with their broadswords and their arrows. Women and children had torn up paving stones from the streets and hurled them down on their heads from the ramparts. He had even seen one of their pale priests take a turn at the walls to help upend the vats of boiling pitch. Some of his men had run, their nerve broken; Mustapha had cut them down with his sword, then rallied his soldiers again for a renewed effort.

And now, for the first time that day, he was afraid.

"How many men?" the young man on the throne repeated.

Mustapha dared to raise his head a little to stare into the Sultan's eyes. Oh, great God. "Twenty thousand, Lord," he whispered.

"Twenty thousand!" He leaped to his feet and every man in the room—except one—took a pace backward.

In the long silence that followed, several of the generals thought they could hear Mustapha try to swallow.

When Sultan Suleyman spoke again, his voice was soft and sibilant. Like the death rattle in a man's throat, Mustapha thought. "You advocated this expedition. For three centuries the infidels have taunted the Osmanlis from this fortress. Even the Fatih and my father Selim could not dislodge them. But you told your Sultan that this time it would be different!"

Mustapha was silent. He knew there could be no excuse for failure. Besides, he could not be sure his men would follow him to the walls again.

The silk of Suleyman's robes rippled in the light of the oil lamps as his body shook with the force of his rage. His hands were clenched into white fists at his side. A froth of spittle had formed in the corners of his mouth.

"Another twenty thousand of your Sultan's army lie in the mud at the foot of this accursed rock, the rest are afflicted with the pestilence, and still the walls stand! Winter is at hand; even now the storms are boiling on the horizon, ready to shatter the fleet and freeze the rest of your Sultan's army. Yet if Suleyman turns away now, it will be to drag the banner of the Osmanli, the banner of Islam, in the dirt! You brought your Sultan to Rhodes. What will you have him do now?"

"You advised this!" he screamed, and he stabbed his finger at the second vizier as if it were an iron spike. He turned to the bostanji waiting in the shadows, a sullen and malevolent presence. He made a quick motion with his hands to summon the deaf-mute and screamed, "Execute him!"

The negro strode forward and shoved Mustapha to his knees with one expert motion of his left leg and arm. The bands of muscle in the man's back tensed as he brought his killic above his head to strike.

It was old Piri Pasha, the Grand Vizier, who moved first. He stepped forward, both hands held upward in supplication, momentarily distracting the bostanji. The blade of the killic glittered in the light of the oil lamps.

"Great Lord, please! Spare him! Misguided he may be, but he has fought like a lion in front of the walls! I have seen him—"

"Quiet!" Suleyman screamed, and now there was saliva on his beard. "If you think he is so worthy, then you can join him in Paradise!"

It was as if an unseen hand had swept the room with a scythe. Piri Pasha! He was an old man, the Vizier who had survived Selim the Grim, and had been Suleyman's own tutor as a child. He himself had advised against the attack on Rhodes. The generals and counselors assembled in front of the young Sultan fell on their faces, each of them moaning forbearance.

It was only Ibrahim, the falconer, who dared approach him. "My Lord," he whispered, and took Suleyman's hand. He knelt, and kissed the ruby on the ring finger of his right hand.

Suleyman was about to summon his bostanji for a third commission when he recognized the young man at his feet.

"Great Lord, there is another way."

Suleyman seemed about to pull away from the young man, who still held his hand in both of his. Instead he said: "Tell it, then."

"The histories tell us that the Greeks besieged Troy for fourteen years for the sake of a woman. Will not the Turk, then, oppressed by piracies and invasions from this rock for over three centuries, endure one winter's siege?"

The bostanji shifted his weight. The killic was growing heavy.

"What is your counsel, Ibrahim?"

"They say that when one of the Roman Caesars invaded an island, he would burn his fleet on the beach. Great Lord, perhaps if you were to build a villa on this hill, in full view of the castle, the defenders will know there is to be no reprieve until the fortress is ours. It will crush their spirit. And if our soldiers know your conviction also, it will give them heart."

Suleyman sighed, and eased himself back on to the great throne. With his forefinger he caressed one of the turquoise stones inlaid near the arm. "And what of them?" he said, nodding in the direction of the two men who still knelt, heads bowed, below the killic. He looked at old Piri Pasha and winced. How could he have contemplated such a thing?

"There has been too much Turkish blood spilled today already," Ibrahim said.

What a diplomat you are! Suleyman thought. An almost imperceptible shake of the head and the bostanji vanished once more into the shadows.