Items related to Days of Infamy: A Novel of Alternate History (Days... 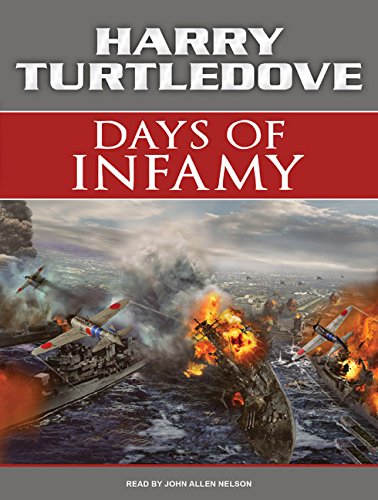 On December 7, 1941, the Japanese launched an attack against U.S. naval forces stationed in Pearl Harbor, Hawaii. But what if the Japanese followed up their air assault with an invasion and occupation of Hawaii? This is the question explored by Harry Turtledove in Days of Infamy, with frightening implications. With American military forces subjugated and civilians living in fear of their conquerors, there is no one to stop the Japanese from using the islands' resources to launch an offensive against America's western coast.

Harry Turtledove is an award-winning and bestselling author of science fiction, fantasy, and historical fiction. His alternate-history works include How Few Remain (winner of the Sidewise Award for Best Novel), The Man with the Iron Heart, the Worldwar saga, the Colonization books, and the Settling Accounts series.

Alternate-history master Turtledove (Ruled Britannia) presents a starkly realistic view of what might have been had the Japanese followed the bombing of Pearl Harbor with a land invasion and occupied Hawaii. U.S. airman Fletch Armitage, held in a POW camp under horrifying conditions (the Japanese never signed the Geneva Convention), keeps hope alive even as he slowly starves. His ex-wife, Jane, keeps her head down in occupied Wahiawa, tending her assigned garden plot and hoping she won't be raped. Fisherman Jiro Takahashi, a native Japanese, welcomes the Rising Sun in Hawaii, but his sons, who consider themselves American, aren't so sure, even though the white Americans begin treating Japanese-Americans with contempt, particularly those who act as translators for the invaders, further widening the racial divide and increasing tensions. As the Japanese strengthen their hold on the islands, each side comes to grudgingly accept the courage of the other, despite the cultural chasms that separate them. The Americans vow to retake the islands, setting the scene for a final showdown that pits mastermind Commander Genda and maneuverable Zero airplanes against American strategy that includes technology the Japanese lack: radar. A less than neatly wrapped-up ending leaves room for a sequel. With an emphasis on tactics and warfare technology, this exciting, well-researched alternate history will please history buffs and SF fans alike.
Copyright © Reed Business Information, a division of Reed Elsevier Inc. All rights reserved.

1. Days of Infamy: A Novel of Alternate History

Book Description MP3 CD. Condition: Good. Minor surface scratches to the disc. Good condition is defined as: a copy that has been read but remains in clean condition. All of the pages are intact and the cover is intact and the spine may show signs of wear. The book may have minor markings which are not specifically mentioned. Most items will be dispatched the same or the next working day. Seller Inventory # mon0015663213

Shipping: US$ 11.41
From United Kingdom to U.S.A.
Destination, rates & speeds