Items related to For One More Day

Albom, Mitch For One More Day 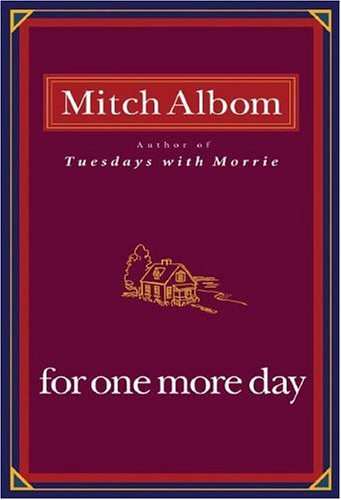 This is the story of Charley, a child of divorce who is always forced to choose between his mother and his father. He grows into a man and starts a family of his own. But one fateful weekend, he leaves his mother to secretly be with his father - and she dies while he is gone. This haunts him for years. It unravels his own young family. It leads him to depression and drunkenness. One night, he decides to take his life. But somewhere between this world and the next, he encounters his mother again, in their hometown, and gets to spend one last day with her - the day he missed and always wished he'd had. He asks the questions many of us yearn to ask, the questions we never ask while our parents are alive. By the end of this magical day, Charley discovers how little he really knew about his mother, the secret of how her love saved their family, and how deeply he wants the second chance to save his own.

From the author of The Five People You Meet in Heaven and Tuesdays with Morrie, a new novel that millions of fans have been waiting for

Mitch Albom is an author, playwright, and screenwriter who has written seven books, including the international bestseller Tuesdays with Morrie, the bestselling memoir of all time. His first novel, The Five People You Meet in Heaven, was an instant number-one New York Times bestseller that has since sold more than six million copies worldwide. Both books were made into acclaimed TV films. Mitch also works as a columnist and a broadcaster, and serves on numerous charitable boards. He lives with his wife, Janine, in Michigan.

Book Description Hardcover. Condition: New. Dust Jacket Condition: New. 1st Edition. HAND SIGNED 0N THE TITLE PAGE by MITCH ALBOM. NEW & UNREAD - a beautiful copy of this book. FIRST EDITION/FIRST PRINTING. The boards Are Clean, Not Bumped. Fore Edges Are Clean. Not Remaindered marked. Dust Jacket Is In Fine Condition. No Chipping, Crinkles, or tears. Not Price Clipped. DUST JACKET in protective Brodart Cover. Only opened at the original signing event years ago and then lovingly boxed and stored until now - A PRISTINE COPY OF OF THIS TITLE. PHOTOS OF THE ACTUAL BOOK SENT UPON REQUEST. ALL BOOKS HAVE BEEN BOXED IN CLIMATE CONTROLLED STORAGE AND HAVE NOT BEEN TOUCHED BY ANY OTHER HUMAN THAN ME FOR AT LEAST THE LAST 10 YEARS - ALL BOOKS ARE SEALED AND BUBBLE WRAPPED AND SHIPPED IN BOXES - YOU CAN BUY HERE WITH CONFIDENCE KNOWING THAT A BUNCH OF STRANGERS HAVE NOT HANDLED YOUR BOOK -. Signed by Author(s). Seller Inventory # 008487