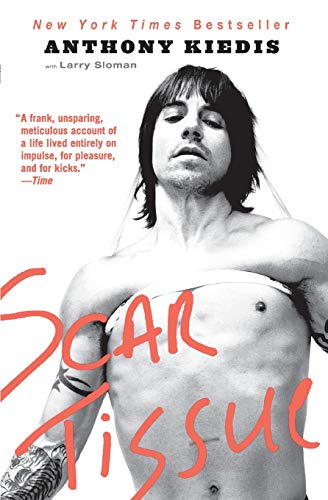 In this "vivid and inspiring" NYT bestseller (Newsweek), the Red Hot Chili Peppers' lead singer and songwriter shares a searingly honest account of life in the rock scene's fast lane -- from the darkness into the light.
In 1983, four self-described "knuckleheads" burst out of the mosh-pitted mosaic of the neo-punk rock scene in L.A. with their own unique brand of cosmic hardcore mayhem funk. Over twenty years later, the Red Hot Chili Peppers, against all odds, have become one of the most successful bands in the world. Though the band has gone through many incarnations, Anthony Kiedis, the group's lyricist and dynamic lead singer, has been there for the whole roller-coaster ride. In Scar Tissue, Kiedis delivers a compelling life story from a man "in love with everything" -- the darkness, the death, the disease. Even his descent into drug addiction was a part of that journey, another element transformed into art.
Whether he's honoring the influence of the beautiful, strong women who have been his muses or remembering the roaring crowds of Woodstock and the Dalai Lama's humble compound, Kiedis shares a compelling story about the price of success and excess. Scar Tissue is a story of dedication and debauchery, of intrigue and integrity, of recklessness and redemption -- a story that could only have come out of the world of rock.

Anthony Kiedis grew up in L.A. and formed The Red Hot Chili Peppers in high school. The group's breakthrough album, Blood Sugar Sex Magik, was recorded in 1991; their 1999 album Californication sold over 13 million copies worldwide. Their latest album, By the Way, is one of their best sellers yet. The band toured extensively in 2003. Kiedis lives in the Los Angeles area.

One day I showed up to rehearsal and Jack and Hillel and Flea, who probably loved me more than any three guys on earth, said, "Anthony, we're kicking you out of the band. We want to play music and you obviously don't, so you have to go. We're going to get a different singer and we're going to go on so you're out of here."

I had a brief moment of clarity where I realized that they had every right in the world to fire me. It was really an obvious move, like cutting off your damn foot because it was gangrened so that the rest of your body wouldn't die. I just wanted to be remembered and acknowledged for those two or three years that I had been in the Red Hot Chili Peppers as a founding member, a guy who started something, a guy who made two records, and whatever else would come after that, that was theirs. Part of me was very genuine in letting go of the band. But part of what made it so easy for me to accept was that now I knew I had zero responsibilities and I could just go off with Kim and get loaded.

Much to their amazement I just shrugged and said, "You guys are right. I apologize for not contributing what I should have been contributing this whole time. It's a crying shame, but I understand completely and I wish you guys the best of luck."