Items related to The Big Idea: How to Make Your Entrepreneurial Dreams...

Deutsch, Donny The Big Idea: How to Make Your Entrepreneurial Dreams Come True, From the Aha Moment to Your First Million

The Big Idea: How to Make Your Entrepreneurial Dreams Come True, From the Aha Moment to Your First Million 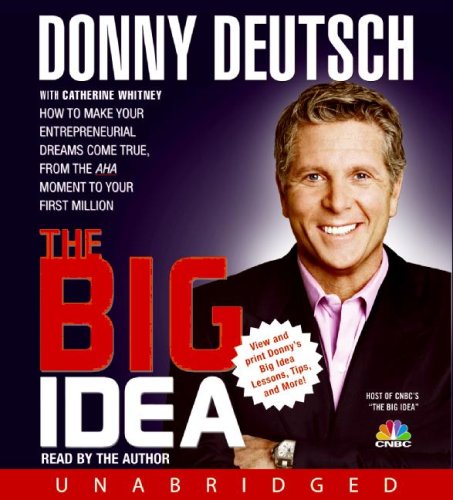 Donny Deutsch's hit CNBC show The Big Idea has put the spotlight on that ordinary moment and the people who have the courage and stamina to make their dreams come true.

Some people think a big idea is like a lightning bolt striking out of the blue that slams you in the head. But it's hardly ever like that. The big idea isn't an act of God. It's an act of daily life. Simply put, the idea that will make millions starts with an observation.

A carpenter gets tired of almost losing a finger every time he slices a bagel. Bam! The Bagel Guillotine. A mother is frustrated that her pantry is full of stale food because the packages don't close. Bam! Quick Seals. Howard Schultz notices on a trip to Italy that there are coffee bars on almost every corner. Bam! Starbucks. None of them had a barrel of cash. None of them had a ton of experience. They had a big idea and the will to follow through.

In The Big Idea, Deutsch draws not only on his own tremendous focus and expertise, but on that of dozens of the successful entrepreneurs whom he has interviewed, to help you create your own enterprise. From the "Gut Check Moment" to "Mom Power," The Big Idea takes aspiring entrepreneurs along every step of the way. The Big Idea is your road map to the American dream.

UnderDonny Deutsch'sleadership as Chairman and Chief Executive Officer, Deutsch Inc. grew into one of the nation's premier cutting-edge advertising agencies, with blue chip clients, including Mitsubushi, Johnson & Johnson, Revlon, Coors, Novartis, Monster, and Old Navy. BothAdvertising AgeandAdweekhave honored the $2.7 billion agency time and again as "Agency of the Year". Deutsch was also a lead member of the successful Clinton/Gore communications team, and is a graduate of the Wharton School at the University of Pennsylvania. He serves on the UPenn School of Social Work's Executive Committee and the Board of Directors of the Michael J. Fox Foundation for Parkinson's Research.

1. The Big Idea: How to Make Your Entrepreneurial Dreams Come True, From the Aha Moment to Your First Million

2. The Big Idea: How to Make Your Entrepreneurial Dreams Come True, From the Aha Moment to Your First Million