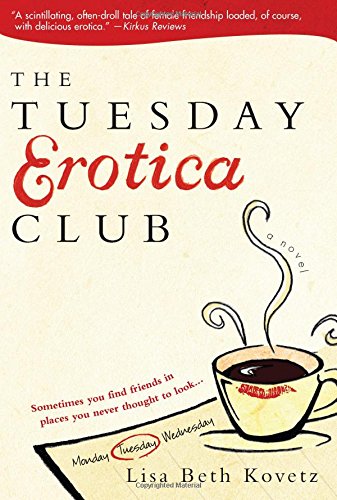 Four women meet in an empty conference room. Each is slightly nervous, slightly intrigued and all are armed with steamy fantasies of their own creation. What was once a boring lunchtime literary club is transformed into something else, something forbidden, something that will make them forever friends.

"Who knew writing about and reading about dirty sexual peccadilloes could be so cathartic and life-affirming?" ―Kirkus Reviews

"A clever and bawdy debut with characters that immediately transport the reader onto a sexy rollercoaster ride of fun. A daring novel of shared female fantasies that most women would never reveal in polite, or for that matter, impolite, company. ―Suzy Parker, author of Sex in the South

"This is the debut of an obviously gifted writer whose ear for dialogue and eye for detail (to say nothing of the sensual and sexual sort) put Lisa Beth Kovetz's name on my list of authors to look forward to reading." ―Laura Van Wormer, bestselling author of Riverside Drive

"An always entertaining account of four strong characters who become friends and, in the end, much more." ―Booklist

Lisa Beth Kovetz is an award-winning writer, producer, playwright and stand-up comic. Her company, Flying South Productions, produces children's media and short films. Kovetz's play "David's Balls" appeared at the Edinburgh Fringe Festival, has been translated into Romanian for the Pearl of the Carpathians Theater Festival and is now on a three-year run in Bucharest. She lives in Los Angeles, California.

What started out as a literary club composed of 40 law-firm employees who met at lunchtime to share their attempts at writing has devolved into four women who write erotica. Aimee created the group to take her mind off the fact that she's pregnant and her husband is increasingly absent. Lux, a young secretary working her way out of her degenerate neighborhood, uses the club as a way to learn from the other women. Brooke attends in support of her friend Aimee, works part-time at the firm, paints, and has had the same boyfriend for 20 years. At 50, Margot is successful but realizes that she has no female friends. Four very different women, who at first seem to have nothing in common, grow closer as each week passes--not that their relationships don't have problems--but therein lies the fun of reading Kovetz's sometimes raunchy but always entertaining account of four strong characters who become friends and, in the end, much more. Maria Hatton
Copyright © American Library Association. All rights reserved