Items related to A Trance After Breakfast: And Other Passages

Cheuse, Alan A Trance After Breakfast: And Other Passages

A Trance After Breakfast: And Other Passages 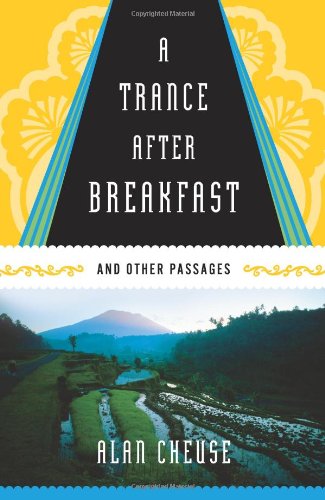 Along with luggage and tickets, we always travel with that which it is impossible to leave behind: ourselves, our spirits, our souls. By definition the best travel writing carries us on a soul-journey, the sort of trip that dramatizes how the heart learns about its place in the world.

In A Trance After Breakfast, poetic wanderer and novelist (To Catch the Lightning) Alan Cheuse has crafted a collection that masterfully exceeds such standards. He lures the reader around the world, from Bali and New Zealand to Mexico and back home again to his native New Jersey, making the foreign familiar and the familiar slightly foreign.

Collected from such celebrated publications as Gourmet, the Antioch Review, and the San Diego Reader, the dispatches in A Trance After Breakfast will enchant, captivate, and transport readers.

Novelist, essayist, and story writer Alan Cheuse has been described as "The Voice of Books on NPR." He has written four novels, including the recent To Catch the Lightning, and a pair of novellas. He is also the editor of Seeing Ourselves: Great Early American Short Stories and co-editor of Writers' Workshop in a Book. He teaches writing at George Mason University.

""It's very good to travel with Cheuse, the literate Jersey boy who's lived long enough to think it's time to see the rest of the world. As our guide, he's seeing it all for the first time, just like we are (though he's read about it), so that he's dazzled, moved, impressed, shocked, instructed and provoked. He is us, in other words. And he relishes the vast world outside his ken as if it were a rare jewel." --Richard Ford" -

""This is how I want to learn to travel, with Alan Cheuse's eye and ear and brain and, most of all, heart. 'A love affair of fierce currents,' indeed. A Trance After Breakfast will endure as a model for the engaged explorer, even the armchair sort." --Josephine Humphreys" -

""Alan Cheuse's evocations of place – the water world of his youth on the Jersey shore, his tramps in Bali and New Zealand, his inquiries on California's border with Mexico – are Whitmanesque in their enthusiasm and captivating in all their particulars. His observations on the way various writers have approached southeast Asian settings in their novels, on the one hand, and his thoughts on Jewish cultural life in Mexico, on the other, are the reflections of a charming and original mind." --Barry Lopez
" -

1. A Trance After Breakfast: And Other Passages

2. A Trance After Breakfast: And Other Passages Cheuse, Alan