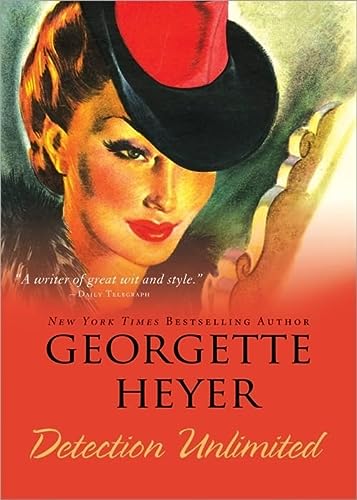 They all wanted him dead...but which one turned hatred into murder?

Slumped on a seat under an oak tree is local solicitor Sampson Warrenby, stone cold dead, with a bullet in his brain. And everybody in the village seems ready to tell Chief Inspector Hemingway who murdered him. Could the killer have been the dead man's niece, who found him in the first place? The couple at the farm had a guilty secret―what was it? And why is it someone else actually wants to be the prime suspect?

Detection is unlimited when everyone in the tiny village has a theory about who murdered the socially pushy newcomer. With no shortage of motives and means, it's up to Chief Inspector Hemingway to uncover which of the villagers is guilt of the crime.

About the Author:
The late Georgette Heyer was a very private woman. Her historical novels have charmed and delighted millions of readers for decades, though she rarely reached out to the public to discuss her works or private life. It is known that she was born in Wimbledon in August 1902, and her first novel, The Black Moth, was published in 1921.

Heyer published 56 books over the next 53 years, until her death from lung cancer in 1974. Heyer's large volume of works included Regency romances, mysteries and historical fiction. Known also as the Queen of Regency romance, Heyer was legendary for her research, historical accuracy and her extraordinary plots and characterizations. Her last book, My Lord John, was published posthumously in 1975. She was married to George Ronald Rougier, a mining engineer, and they had one son together, Richard.
Excerpt. © Reprinted by permission. All rights reserved.:

Mr Thaddeus Drybeck, stepping from the neat gravel drive leading from his house on to the road, found his further progress challenged, and, indeed, impeded, by the sudden onrush of several Pekinese dogs, who bounced and barked asthmatically about his feet. Repressing a desire to sweep them from his path with the tennis-racquet he was carrying, he used this instead to guard his ankles, for one of Mrs Midgeholme's Pekes was known to bite.

'Shoo!' said Mr Drybeck testily. 'Get away!' The Pekes, maddened to frenzy by this form of address, bounced and barked more than ever; and one of them made a dart at Mr Drybeck's racquet.

'Peekies, Peekies!' trilled a new voice, in loving reproach. 'Naughty! Come to Mother at once! It's only their play, Mr Drybeck.'

Three of the Pekes, feeling that the possibilities of the situation had been exhausted, abandoned their prey; the fourth, standing four-square before Mr Drybeck, continued to bark and growl at him until snatched up into the arms of her owner, who dealt her a fond slap, and said: 'Isn't she a pet? This is Mother's eldest little girl, aren't you, my treasure? Now, say you're sorry to poor Mr Drybeck!'

Mr Drybeck, perceiving that the animal was being thrust towards him, recoiled.

The expression in Ursula's indignantly bulging eyes appeared to be one of loathing rather than of hurt, but this reflection Mr Drybeck kept to himself, merely saying in his precise way: 'I fear I am not fond of dogs.'

'I'm sure you are really,' said Mrs Midgeholme, unwilling to think ill of a fellow-creature. Her eyes, which, from their slight protruberance, bore a resemblance to those of her dogs, ran over him appraisingly. 'I expect you're off to the Haswells',' she said sapiently. 'You're a great tennis-player, aren't you?'

Mr Drybeck disclaimed, but felt the description to be just. In his youth he had spent his every summer holiday competing in tournaments, and to his frequent success the row of trophies upon the mantleshelf in his diningroom bore testimony. His style of play was old-fashioned, like everything else about him, but the young men who considered him a desiccated exponent of pat-ball nevertheless found him a difficult adversary to beat. He was by profession a solicitor, the last surviving member of a firm long-established in the neighbouring town of Bellingham. He had never married, was extremely precise in all his ways, and disliked nearly every form of modern progress: a circumstance which possibly accounted for the sadly diminishing numbers of his clients. The older members of the community amongst which he had lived all his life remained faithful to him, but the younger men seemed to prefer the methods employed by his rival and bęte noire, Mr Sampson Warrenby, an upstart of no more than fifteen years' standing in the district. Sampson Warrenby's rapidly expanding business, at first a small thorn in Mr Drybeck's flesh, was fast assuming the proportions of a menace; and since the day, just after the War ended, when he had had the bad taste to move his private residence from Bellingham to the hitherto select village of Thornden, it had become impossible for the indignant Mr Drybeck to continue to be socially unaware of his existence. He had bought a house in the lane which debouched on to the main Bellingham road at a point almost opposite Mr Drybeck's small but ancestral home.

'Alas, my tennis days are over!' proclaimed Mrs Midgeholme. 'But you'll meet my Lion.'

Mr Drybeck was unalarmed. Major Midgeholme, who had been given the name of Lionel by optimistic parents, was a shy man of retiring habits, quite cast into the shade by his kind-hearted but somewhat overpowering wife.

'I'll walk with you as far as the corner,' pursued Mrs Midgeholme, tucking Ursula under her arm. 'Unless you mean to go by way of the lane?'

The lane, which served the little house rented by Miss Patterdale, at the corner, and, farther down and facing the common, Mr Warrenby's residence, led, by way of a stile, to the footpath which flanked the Haswells' large garden, and ran on beside the Squire's eastern plantations to join the northern and secondary road to Bellingham. There was a gate at the bottom of the Haswells' garden, but although this would certainly have been Mr Drybeck's shortest route he would have thought it very improper to have presented himself at the house by way of a private back-gate. So he politely fell into step beside Mrs Midgeholme, and accompanied her down the road to where the main village street intersected it. Since the Pekes had to be continually admonished, conversation was of a desultory nature. Mr Drybeck, wincing at his companion's frequent shrieks to Umbrella, Umberto, and Uppish, was forced to remind himself, not for the first time, that Flora Midgeholme was a goodnatured and a plucky woman, who bore uncomplainingly the hardships of a straitened income, eked it out by dispensing with the services of a maid and by breeding dogs, and always presented to the world the part of a woman well-satisfied with her lot. Only he did wish that she wouldn't call her dogs such absurd names.

But this was unavoidable. On his retirement from the army, Major Midgeholme had built a bungalow in Thornden, at the end of the village street, where the tarred road ended and a mere cart-track led across the fields to a small farm. Mrs Midgeholme had conceived the pretty idea of calling the bungalow Ultima Thule; and when, in course of time, she began to breed Pekes Ultima had seemed to her the only possible patronymic to bestow upon them. Ultima Ulysses and Ultima Una, the progenitors of a long and lucrative line, received their alliterative names in a moment of impulsive inspiration. Ursula, Urban, and Urania had followed, and by that time the custom of alliteration had been established, and the supply of proper names was running out. Umberto, Uriah, and Ukica exhausted it, and succeeding generations of puppies received their names from the pages of a dictionary. 'But, after all,' said Mrs Midgeholme, looking on the bright side, 'they are rather quaint, aren't they? And Unready won two firsts and two seconds at Cruft's.'

In the intervals of summoning Umberto, Umbrella, and Uppish out of other people's gardens, Mrs Midgeholme confided to her companion that although she had been invited to The Cedars to watch the tennis, and to take tea, she had been obliged to refuse. 'For I don't mind telling you, Mr Drybeck, that I doubt if I could trust myself.'

'Not,' said Mrs Midgeholme, her eye kindling, 'if I am expected to speak to Mr Warrenby. And if he's there, which of course he will be, nothing would stop me giving him a piece of my mind! So I'm not going.'