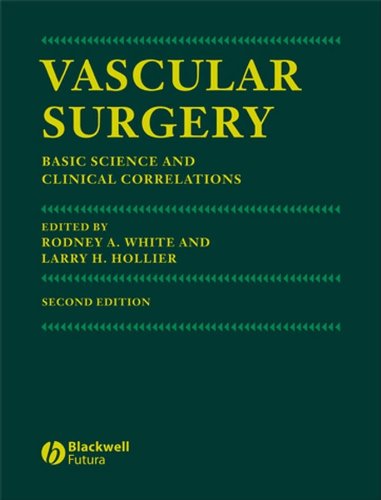 This second edition of a very successful vascular surgery text was developed in order to address significant changes that have occurred in contemporary vascular surgery and to highlight new information that has developed regarding vascular imaging, interventional and endovascular procedures. The overall length of the text is slightly shorter than the first edition with relevant core chapters being retained to emphasize the basic science nature of the text, with approximately 60% of the material undergoing major revisions or being new chapters.

The significant change from the first text is an emphasis on vascular pathology and physiology that is relevant to current practice including information that is currently included on the vascular board examinations. A new emphasis on endovascular therapies has been added by including five chapters on endovascular techniques and an additional section with six chapters comparing conventional vascular reconstruction to endovascular methods. These new chapters address the most important issue in contemporary vascular surgery, i.e., the role of endovascular methods in treating vascular lesions and the impact that this has on training and credentialing. A unique aspect of this book differentiating it from other texts is a comparison of conventional methods with the endovascular techniques.

Overall the text provides a comprehensive perspective of contemporary vascular surgery and future perspectives. The authors are preeminent in the field and are most capable for addressing the assigned topics with the goals being to provide an updated and forward looking text that accommodates the needs of practicing and training vascular surgeons.

Book Description Condition: Good. This is an ex-library book and may have the usual library/used-book markings inside.This book has hardback covers. In good all round condition. Please note the Image in this listing is a stock photo and may not match the covers of the actual item,2300grams, ISBN:1405122021. Seller Inventory # 7707592

Shipping: US$ 17.24
From United Kingdom to U.S.A.
Destination, rates & speeds

Book Description Hardcover. Condition: Fine. Item is in like new condition with minor shelf wear. Might have a remainder mark or slight wear from sitting on the shelf. Seller Inventory # DS-1405122021-1