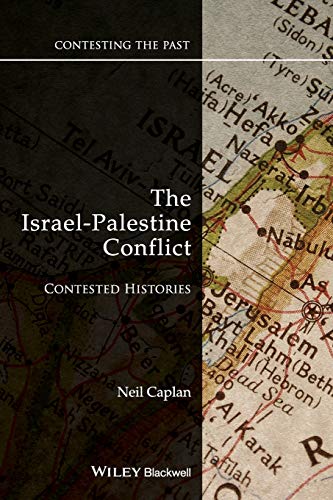 The Israel-Palestine Conflict: Contested Histories provides non-specialist readers with an introduction and historical overview of the issues that have characterized and defined 130 years of the still unresolved Israeli-Palestinian conflict.

"This volume suggests a fresh and original interpretation to the history of the Arab Israeli conflict. Caplan juggles skillfully and even-handedly between the two narratives, reflecting the parties’ own views without embracing the cause of any party."
–Joseph Nevo, University of Haifa

"An impressive and very valuable work. One could not ask for a better short history of the conflict. Caplan offers readers a study that is extremely well-informed, resolutely fair-minded, and filled with thoughtful insights."
–Mark Tessler, University of Michigan

The Israel-Palestine Conflict: Contested Histories offers non-specialist readers insights into the causes and consequences of the Israeli-Palestinian conflict. A general introduction is followed by a detailed historical overview of the issues that have defined more than a century of political tensions and open hostilities.

Caplan highlights the tangible issues over which the parties are fighting, but returns frequently to examine some of the more intangible underlying factors that continue to hamper a peaceful resolution, such as the mutual sense of victimization shared by both parties. Giving voice to the competing narratives of both Palestinians and Israelis, this book breaks away from polemical approaches that have undermined academic discussion and political debates about the conflict. The author introduces readers to the major historiographical debates sparked by the dispute, and suggests more useful ways of explaining and understanding the obstacles to reconciliation and conflict resolution.

A native of Montreal, Neil Caplan received his Ph.D. from the London School of Economics and Political Science. Since retiring from teaching in 2008 he has held an affiliate position in the History Department of Concordia University and is Scholar-in-Residence at Vanier College, both in Montreal. He is the author of numerous scholarly articles and eight books, including Futile Diplomacy, a 4-volume documentary history of Zionist-Arab and Arab-Israeli negotiations, 1913-1956 and (with Laura Z. Eisenberg) Negotiating Arab-Israeli Peace: Patterns, Problems, Possibilities. His most recent publication is My Struggle for Peace: The Diary of Moshe Sharett, 1953-1956, co-edited with Yaakov Sharett.