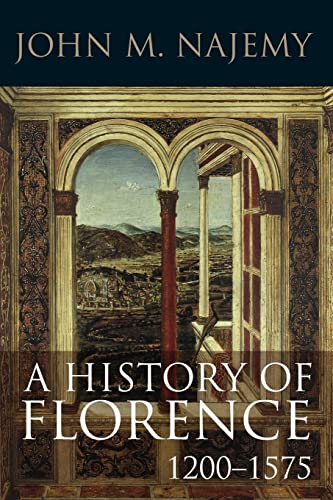 In this history of Florence, distinguished historian John Najemy discusses all the major developments in Florentine history from 1200 to 1575.

Florence during the Renaissance is famously known as the center for the rebirth of scholarship, literature, and the arts. But it was also an autonomous republic, a site of innovative experiments in government, a major economic power that produced great wealth and yet underwent recurrent fiscal crises, and a locus of conflicts among the elite families, the guild community, and the working classes, and between family-based factions grounded in patronage and private power.

In this history of Florence, distinguished historian John Najemy discusses all the major phases of Florentine history from 1200 to 1575, including the formation of the elite of great families, the rise of the guild-based "popolo" and the guild republic of the 1290s, the crisis of the 1340s, the revolutions of 1378-82, the wars against Milan, the fiscal crisis of the 1420-30s, the rise and fall of the Medici regime, the republican revival in the age of Savonarola and Machiavelli, and the drama of the last republic of 1527-30 and subsequent emergence of the principate. His account weaves together intellectual, cultural, social, economic, religious, and political developments, capturing Florence's transformation from a medieval commune into an aristocratic republic and finally into a princely and territorial state.

Based on the mass of scholarship on Florentine history, and on a first-hand understanding and close reading of the primary sources, Najemy provides an original interpretation of Florentine history that will appeal to scholars and general readers for years to come.

John M. Najemy is Professor of History at Cornell University and the author of Between Friends: Discourses of Power and Desire in the Machiavelli-Vettori Letters of 1513–1515 (1993) and Corporatism and Consensus in Florentine Electoral Politics, 1280–1400 (1982). For the former he won the Marraro Prize of the Society for Italian Historical Studies and for the latter the Marraro Prize of the American Historical Association. He has also edited Italy in the Age of the Renaissance, 1300–1550 (2004).