Items related to Pacific Eldorado: A History of Greater California 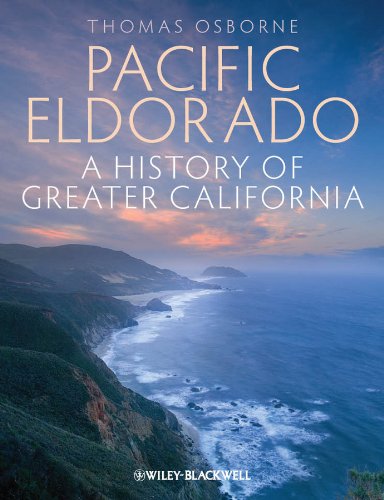 Osborne's work is the first history text to explore the sweep of California's past in relationship to its connections within the maritime world of the Pacific Basin.

California’s rich and complex history has long been shaped by its relationship with the vast ocean along its western shores. Pacific Eldorado: A History of Greater California presents the first comprehensive text to explore the entire sweep of California’s past in relationship to the maritime world of the Pacific Basin. Noted historian Thomas J. Osborne dispels the commonly held notion of pre – Gold Rush California as a remote and isolated backwater. He traces the evolution of America’s most populous state from the time of prehistoric Asian seafarers and 16th-century Spanish explorers through to its emergence in the modern world as a region whose unmatched resources and global influence have rendered it a veritable super state―a Greater California whose history has far exceeded its geographical boundaries. Interspersed throughout the text are several “Pacific Profiles,” brief chronicles of notable figures who have made an impact on the state’s history. At once scholarly and accessible, Pacific Eldorado offers a strikingly original new interpretation of the origins and evolution of an extraordinary American state.

Thomas J. Osborne is Emeritus Professor of History at Santa Ana College, where he received the inaugural Distinguished Faculty Lecturer Award. He earned his Ph.D in history from Claremont Graduate University and is the author and co-author of several scholarly books, articles and reviews, including Paths to the Present: Thoughts on the Contemporary Relevance of America's Past (co-authored with Fred R. Mabbutt) and "Empire Can Wait:" American Opposition to Hawaiian Annexation, 1893-1898.