Comic Relief: A Comprehensive Philosophy of Humor (New Directions in Aesthetics, No. 9) 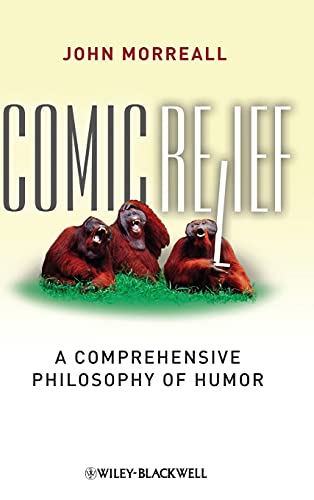 Western philosophy’s traditional assessment of the nature and value of humor has not been kind, as the standard theories made humor look antisocial, irrational, and foolish. It wasn’t until well into the twentieth century that humor gained even a semblance of respect. Comic Relief goes a great way toward ameliorating this injustice. In it, noted philosophical humor writer John Morreall develops a comprehensive theory that integrates psychological, aesthetic, and ethical issues relating to humor. He also presents and critiques the standard Superiority, Incongruity, and Relief Theories of humor, revealing how they not only fail to explain its nature, but actually support traditional prejudices against humor. While utilizing elements from traditional theories of humor, Morreall goes into much greater depth about the opposition between amusement and emotions, the cognitive and practical disengagement in humor, the psychological and social benefits of humor, and the comic vision of life itself. He further argues that humor’s benefits overlap significantly with those of philosophy, concluding that philosophy’s traditional rejection of humor has been an egregious error. Informed by scholarly research, Comic Relief is an enlightening and accessible foray into the serious business of humor.

John Morreall’s previous publications include Taking Laughter Seriously (1983); The Philosophy of Laughter and Humor (1987); Humor Works (1997); and Comedy, Tragedy, and Religion (1999). In 2004 and 2005, he was elected President of the International Society for Humor Studies. His work has been featured in the New York Times, the Washington Post, and the Economist.

5. Comic Relief: A Comprehensive Philosophy of Humor (New Directions in Aesthetics, No. 9)

Book Description 2009. Condition: NEW. 9781405196123 This listing is a new book, a title currently in-print which we order directly and immediately from the publisher. For all enquiries, please contact Herb Tandree Philosophy Books directly - customer service is our primary goal. Seller Inventory # HTANDREE0772995