Items related to Knuffle Bunny Too 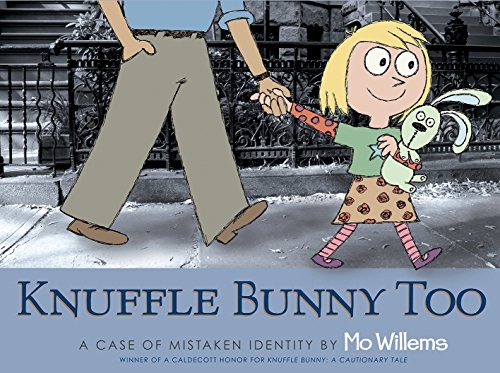 Mo Willems is a three-time Caldecott Honor winner for Don't Let the Pigeon Drive the Bus!, Knuffle Bunny: A Cautionary Tale and Knuffle Bunny Too: A Case of Mistaken Identity. His celebrated Elephant & Piggie early-reader series has been awarded the Theodor Seuss Geisel Medal on two occasions as well as three Honors. Other favourites include Goldilocks and the Three Dinosaurs and That Is Not a Good Idea. Before he turned to children's books, Mo was a writer and animator on Sesame Street, where he won six Emmy Awards. Mo lives with his family in Paris, France. Find him online at www.mowillems.com and on Twitter as @The_Pigeon.

Trixie knows that she will wow all the kids at Pre-K with her "one-of-a-kind" toy, but she doesn't reckon on Sonja, who arrives with her own Knuffle Bunny-and the morning does "not go well." The two bunnies are confiscated and returned at the end of the day, but neither girl notices that they've been swapped, until the wee hours of the morning. Willems revisits his black-and-white Brooklyn, his now-signature cartoon characters superimposed on the photographs. This technique here yields some spectacular results: The middle-of-the-night hostage exchange features a glorious image of the Manhattan skyline, the teeny figures of Trixie and her daddy and Sonja and her daddy approaching from opposite sides of Grand Army Plaza. His mastery of pacing is evident in every panel and page turn, the understated text punctuating the illustrations perfectly, and his use of the conventions of cartooning add to the hilarity. Too often, sequels come off as obviously calculated attempts to cash in on success; this offering, with its technical brilliance and its total and sympathetic understanding of the psychology of the preschooler, stands as magnificent in its own right. Kirkus"

When Trixie and her beloved Knuffle Bunny go to preschool, Trixie is shocked to learn that her bunny is not entirely unique in the world. Indeed, classmate Sonja has one, too! An argument ensues over the pronunciation of the bunny's name ("Kuh-nuffle," insists Trixie. "Nuffle," replies Sonja), and the teacher confiscates both bunnies, returning them at the end of the day. Trixie's blissful reunion comes to a dramatic conclusion at 2:30 a.m. when she awakens to the horrifying fact that this " is NOT Knuffle Bunny." In an unspeakable error, the stuffed animals have been switched. And both girls expect the mistake to be corrected immediately. Fans will not be surprised that daddy and Trixie venture into the Brooklyn night to meet Sonja and her dad for the rapturous exchange and a final hug that presages friendship between the girls. As readers have come to expect of Willems, his understated text is brief and the visual storytelling is hilariously eloquent. He masterfully employs the technique of setting his vivid, hand-drawn characters against photographs of neighborhood, school, and even (in an exquisite page turn) the beautifully up-lit Grand Army Plaza at night. In both photographs and cartoons there is expansively witty detail, and it will take a keen observer to distinguish between the "twin" bunnies (and to find the famous pigeon). Irresistibly funny, tender, and universal, this is another consummate star turn for Trixie, daddy, bunny, and their creator. SLJ"

In this sympathetic sequel to Knuffle Bunny: A Cautionary Tale, former toddler Trixie gains verbal dexterity and still treasures her rag doll, Knuffle Bunny. Tugging her gangly, red-haired father along the sidewalk, she hurries to her preschool's show-and-tell, eager to show off her pale-green, floppy rabbit. "But just as her daddy kissed her good-bye, Trixie saw Sonja." No words need explain Trixie's distressed expression, because a turn of the page says it all: Trixie's classmate, with a wicked smirk, is clutching a bunny of her own. "Suddenly, Trixie's one-of-a-kind Knuffle Bunny wasn't so one-of-a-kind anymore." Each girl hugs her rabbit, with Trixie insisting, "Kuh-nuffle! Kuh-nuffle!" and Sonja retorting, "Nuffle! Nuffle!" Their teacher raises an eyebrow and puts both rabbits in time-out until the end of the day. Willems expertly sets up this case of mistaken identity, as each girl accidentally brings home the wrong bunny, and a late-night exchange is needed to resolve the girls' dilemma. As in the first book, Willems creates comic-book-style panels, with grayscale photographs of Brooklyn as backgrounds for his color-illustrated characters; insiders will recognize allusions to past Willems titles too. In a satisfying resolution, Trixie and Sonja become best friends, demonstrating that two or more children can enjoy similar toys. Not a word or image feels out of place. PW"

Knuffle Bunny returns, but this time he has a doppelganger. Trixie is off to school, and things are going well enough-until she notices that Sonja is holding her own Knuffle Bunny. Arrgh! The afternoon results in dueling bunnies, which are confiscated by the teacher. Happily, they are returned at the end of the day, but at 2:30 a.m. realization hits: the bunny Trixie is sleeping with is not her own. Despite parental protestations, phone calls are placed, bunnies are exchanged, and the girls, bonded during the trauma, become best friends. This has much of the charm of Knuffle Bunny (2004), a Caldecott Honor Book, but the premise is stretched here: the middle-of-the-night meeting is energetic, but it seems overplayed. As in the previous title, the slice-of-life artwork is smashing. Willem's cartoon-style art, set against crisp black-and-white photos of New York City interiors and exteriors, catches every bit of the plentiful emotion. Keen-eyed kids will have fun keeping track of the Knuffle Bunny as he's lost, then found again. Booklist"

This second book starring Trixie, her parents, and her best stuffed-animal friend (Knuffle Bunny, rev. 9/04) touches on situations and emotions immediately familiar to small children and their grownup caregivers. Trixie (older now, and a whole lot more verbal than when we first met her) can't wait to share her "one-of-a-kind" Knuffle Bunny with her preschool friends. But when she spots classmate Sonja with a Knuffle Bunny look-alike (Sonja calls hers "Nuffle"), "the morning [does] not go well." The girls fight, and the bunnies are confiscated for the day. When it's time to go home, their teacher reunites each girl with her toy...or so it seems. An urgent middle-of-the-night phone call ("We have your bunny") and an emergency rabbit exchange restore order and provide Trixie with her first human best friend. Willems's page design and animation-inspired panel illustrations are just as visually dynamic as in the first book. As before, colorful cartoon-style characters are set against black-and-white photographs of an urban neighborhood. While the text winks above children's heads a couple of times, most young listeners will be so engaged in the drama that they'll care as little as Trixie does about such technicalities as "what 2:30 a.m.' means." Who needs sleep at a time like this? Horn Book"

It was inevitable: since those fi8rst words triggered by her joyful reunion with Knuffle Bunny (Knuffle Bunny, BCCB 10/04), Trixie has learned to talk . . . and talk, and talk, and talk. She's eager to show her one-of-a-kind bunny to her classmates in preschool, until she sees Sonja has her own, nearly identical Knuffle Bunny. The girls argue and get their best friends taken away by the teacher, and there's a tragic mix-up upon their return at the end of the day. Unfortunately, while these girls can talk, they cant' tell time, and when they each discover the mistake in the wee hours of the morning, their beleaguered fathers have no choice but to venture out into the New York night to make the exchange. Willems manages pitch-perfect humor with his usual dexterity as he moves up and down the scales here-this story is as funny for grownups as it is for the slightly older elementary students to whom it seems best suited, and yet it remains sympathetic to listeners who are Trixie's age and have shared her predicament as well. The book mines humor from film noir conventions by casting a falsely sinister complexion over the mistaken identity and the nocturnal exchange, a tone that brings new significance to the black-and-white photographic backdrops behind the lively scrawled figures, while the epilogue brings viewers right back to bleary real life with the young and feckless. Yet another layered and effective work from Willems, this joyously continues his string of uncontested successes. KC BCCB"

2. Knuffle Bunny Too: A Case of Mistaken Identity (Paperback)

5. Knuffle Bunny Too : A Case of Mistaken Identity

Book Description Condition: New. 2008. Paperback. Trixie can't wait to show off her one-of-a-kind Knuffle Bunny at school. But a dreadful surprise awaits. Trixie's bunny is not so one-of-a-kind after all! And matters get worse that night when Trixie realizes that she has brought home the Wrong Bunny. Num Pages: 48 pages, colour illustrations. BIC Classification: 5AC; YBCS. Category: (JN) Preschool (0-5). Dimension: 216 x 307 x 5. Weight in Grams: 314. . . . . . Books ship from the US and Ireland. Seller Inventory # V9781406313826

9. Knuffle Bunny Too: A Case of Mistaken Identity

Shipping: US$ 16.52
From United Kingdom to U.S.A.
Destination, rates & speeds