Items related to Gregor and the Marks of Secret

Suzanne Collins Gregor and the Marks of Secret

Gregor and the Marks of Secret 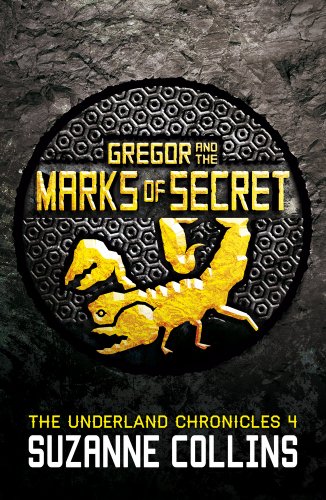 In Book 4 of the bestselling Underland Chronicles, Gregor is drawn ever deeper into a brewing crisis. For generations, rats have run the mice out of whatever lands they've claimed, keeping them constantly on the move. But now the mice are disappearing and the young queen Luxa is determined to find out why.

Gregor and Boots join Luxa on a simple fact-finding mission. But when the true fate of the mice is revealed, it is something far more sinister than they had imagined -- and it points the way to the final prophecy Gregor has yet to fulfill. His abilities are put to the test in this suspenseful, action-packed penultimate installment of Suzanne Collins's thrilling Underland Chronicles.

Grade 5-8–No good deed goes unpunished in the fourth installment in the popular series. Gregor and his sister Boots are regular visitors to Underland, where their mother is slowly recovering from injuries incurred in the previous episode. Gregor is supposed to be studying echolocation with his rat friend, Ripred the Gnawer, but hes doing very badly. Ripred has his own problems, largest of which is Bane, the once-sweet little baby Gnawer whom the protagonist refused to kill in Gregor and the Prophecy of Bane (Scholastic, 2004). Bane, now a half-grown monster of a rat, is surprisingly charismatic yet emotionally stunted and easily controlled by the forces of evil. When Queen Luxa gets a message that the mice that saved her life in the jungle are in trouble, she and Gregor head out to investigate, accompanied by her cousin Howard, several bats, Gregors sisters, and a brave cockroach named Temp. The breathless pace, intense drama, and extraordinary challenges will leave fans clamoring for the conclusion of this fine series.–Mara Alpert, Los Angeles Public Library
Copyright © Reed Business Information, a division of Reed Elsevier Inc. All rights reserved.

1. Gregor and the Marks of Secret

2. Gregor and the Marks of Secret

Book Description Scholastic. Paperback. Condition: New. New copy - Usually dispatched within 3 working days. It's only a few months since Gregor and Boots returned from the Underland, leaving their mother behind to heal from the plague. Though Gregor's family receives frequent updates on her condition, they all know Gregor must return to fulfill his role as the warrior who is key to the Underlanders' survival. Seller Inventory # B9781407137063

Shipping: US$ 15.07
From United Kingdom to U.S.A.
Destination, rates & speeds