Items related to The Winner Effect: The Science of Success and How to...

Ian Robertson The Winner Effect: The Science of Success and How to Use It

The Winner Effect: The Science of Success and How to Use It 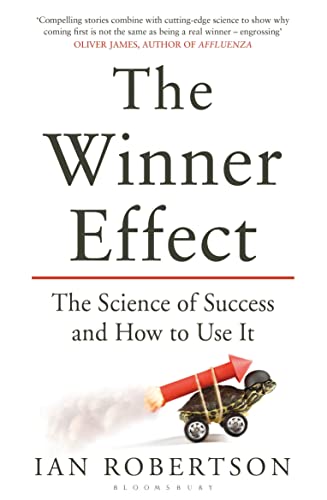 “Ian Robertson is a rare combination: a cutting edge neuroscientist whose important research is done in great depth and with careful detail, who also has the ability  to step back, take risks, and explore the big picture, with a vivid, clear, engaging style, and enviable energy.” —Norman Doidge, author of the New York Times bestseller The Brain that Changes Itself

A neuroscientist and trained clinical psychologist, Ian Robertson is an international expert on neuropsychology. Currently Professor of Psychology at Trinity College Dublin, and formerly Fellow of Hughes Hall, University of Cambridge, he holds visiting professorships at University College London and Bangor University in the United Kingdom, and is a visiting scientist at the Rotman Research Institute in Toronto, Canada. He is a member of the Royal Irish Academy and has published over 250 scientific articles in leading journals. He is also author and editor of ten scientific books, including the leading international textbook on cognitive rehabilitation, and three books for the general reader including Mind Sculpture: Your Brain’s Untapped Potential. He is a regular keynote speaker at conferences on brain function throughout the world. He lives in Dublin, Ireland.

In 1996 Suniya Luthar of the Teachers College of Columbia University and Karen D'Avanzo of Yale University studied two groups of fifteen- to sixteen-year-olds in two very different high schools in the north-east of the United States.5 One school was in a poor inner-city area, with a very low average income, 13 per cent of pupils were white and one in five families received food stamps. The other was a wealthy suburban school with one of the highest average incomes in the country, where 82 per cent of the pupils were white and virtually none received food stamps. Yet the researchers discovered that the richer adolescents were much more anxious and depressed, and used more cigarettes, alcohol, marijuana and other illegal drugs than their more economically impoverished peers (a discovery that has been replicated in other studies inside and outside the USA6). How can this be? Can we find a clue to Paulo Picasso's lack of success in this study?On the face of it, Pablo Picasso's wealth, fame and extraordinary talent were so far removed from the bankers and lawyers in a US suburb that it may seem absurd even to consider comparing their families. And whatever happened to Paulo Picasso was not down to his having too much money. He survived as an adult on whimsically administered dole-outs from his father, who was his casual employer for most of his life, and these left him and his family poor until near the end of his life. But Paulo lived in the shadow of his father's extreme wealth, fame and genius - and as I will show later in the chapter, such shadows can become grimly tangible influences on the lives on whom they fall.Suniya Luthar probed her data in subsequent studies7 to find out why children of rich, successful parents might be unhappier than poorer pupils. She came up with a conclusion which resonated with an observation made about the economics of success by the economist Staffan Linder.8 Linder observed thatsuccessful people's time is valuable and the higher their earnings the more each hour is worth. The economic logic for financially successful parents, then, is to maximise the family income by working long hours and contract out mundane household and childcare activities to lower-paid employees and services. This aligned with Luthar's observation: the rich, born-to-win children spent more time either on their own or with adults other than their parents than the poorer children and they therefore also felt less emotionally close to their parents. Paulo Picasso found it hard enough to get an appointment to see his father, let alone spend 'quality time' with him.Michael Kimmelman interviewed Picasso's former wife Françoise Gilot and his three surviving children for the New York Times in 1996 at the time of the opening of a major Picasso exhibition at the Museum of Modern Art in New York. He wrote on the basis of these conversations: 'Picasso, tellingly, didn't depict his children when they were adolescents or young adults. Adoring toddlers were one thing, teenagers another, and in his art, as in his l...

1. The Winner Effect: The Science of Success and How to Use It (Paperback)

Book Description Bloomsbury Publishing PLC, United Kingdom, 2013. Paperback. Condition: New. Language: English. Brand new Book. What makes a winner? Why do some succeed both in life and in business, and others fail? The 'winner effect' is a term used in biology to describe how an animal that has won a few fights against weak opponents is much more likely to win later bouts against stronger contenders. As Ian Robertson reveals, it applies to humans, too. Success changes the chemistry of the brain, making you more focused, smarter, more confident and more aggressive. And the more you win, the more you will go on to win. But the downside is that winning can become physically addictive.By understanding what the mental and physical changes are that take place in the brain of a 'winner', how they happen, and why they affect some people more than others, Robertson explains what makes a winner or a loser - and how we can use the answers to these questions to understand better the behaviour of our business colleagues, employees, family and friends. Seller Inventory # AA79781408831656

4. The Winner Effect: The Science of Success and How to Use It

5. The Winner Effect: The Science of Success and How to Use It

6. The Winner Effect: The Science of Success and How to Use It

7. The Winner Effect: The Science of Success and How to Use It

9. The Winner Effect: The Science of Success and How to Use It

10. Winner Effect: The Science of Success and How to Use It

Shipping: US$ 44.14
From United Kingdom to U.S.A.
Destination, rates & speeds