Items related to Harry Potter and the Prisoner of Azkaban: 3/7 (Harry... 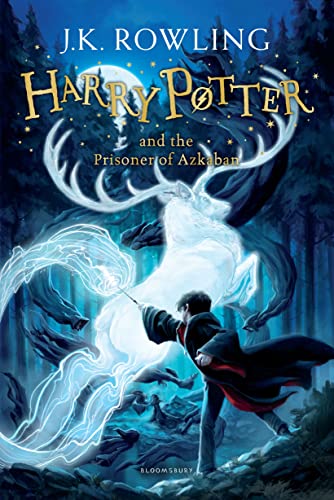 For most children, summer vacation is something to look forward to. But not for our 13-year-old hero, who's forced to spend his summers with an aunt, uncle, and cousin who detest him. The third book in J.K. Rowling's Harry Potter series catapults into action when the young wizard "accidentally" causes the Dursleys' dreadful visitor Aunt Marge to inflate like a monstrous balloon and drift up to the ceiling. Fearing punishment from Aunt Petunia and Uncle Vernon (and from officials at Hogwarts School of Witchcraft and Wizardry who strictly forbid students to cast spells in the nonmagic world of Muggles), Harry lunges out into the darkness with his heavy trunk and his owl Hedwig.

As it turns out, Harry isn't punished at all for his errant wizardry. Instead he is mysteriously rescued from his Muggle neighborhood and whisked off in a triple-decker, violently purple bus to spend the remaining weeks of summer in a friendly inn called the Leaky Cauldron. What Harry has to face as he begins his third year at Hogwarts explains why the officials let him off easily. It seems that Sirius Black--an escaped convict from the prison of Azkaban--is on the loose. Not only that, but he's after Harry Potter. But why? And why do the Dementors, the guards hired to protect him, chill Harry's very heart when others are unaffected? Once again, Rowling has created a mystery that will have children and adults cheering, not to mention standing in line for her next book. Fortunately, there are four more in the works. (Ages 9 and older) --Karin Snelson

FOR TWELVE long years, the dread fortress of Azkaban held an infamous prisoner named Sirius Black. Convicted of killing thirteen people with a single curse, he was said to be the heir apparent to the Dark Lord, Voldemort.

Now he has escaped, leaving only two clues as to where he might be headed: Harry Potter's defeat of You-Know-Who was Black's downfall as well. And the Azkaban guards heard Black muttering in his sleep, "He's at Hogwarts ... he's at Hogwarts".

Harry Potter isn't safe, not even within the walls of his magical school, surrounded by his friends. Because on top of it all, there may well be a traitor in their midst.

1. Harry Potter and the Prisoner of Azkaban

2. Harry Potter and the Prisoner of Azkaban

3. Harry Potter and the Prisoner of Azkaban (Hardback)

Book Description Bloomsbury Publishing PLC, United Kingdom, 2014. Hardback. Condition: New. Language: English. Brand new Book. When the Knight Bus crashes through the darkness and screeches to a halt in front of him, it's the start of another far from ordinary year at Hogwarts for Harry Potter. Sirius Black, escaped mass-murderer and follower of Lord Voldemort, is on the run - and they say he is coming after Harry. In his first ever Divination class, Professor Trelawney sees an omen of death in Harry's tea leaves . But perhaps most terrifying of all are the Dementors patrolling the school grounds, with their soul-sucking kiss.These new editions of the classic and internationally bestselling, multi-award-winning series feature instantly pick-up-able new jackets by Jonny Duddle, with huge child appeal, to bring Harry Potter to the next generation of readers. It's time to PASS THE MAGIC ON . Seller Inventory # AA79781408855911

4. Harry Potter and the Prisoner of Azkaban (Hardcover)

Book Description 2014. Hardcover. Condition: New. Hardcover. When the Knight Bus crashes through the darkness and screeches to a halt in front of him, it's the start of another far from ordinary year at Hogwarts for Harry Potter. Sirius Black, escap.Shipping may be from multiple locations in the US or from the UK, depending on stock availability. 480 pages. 0.486. Seller Inventory # 9781408855911

5. Harry Potter And The Prisoner Of Azkaban

Shipping: US$ 18.01
From United Kingdom to U.S.A.
Destination, rates & speeds