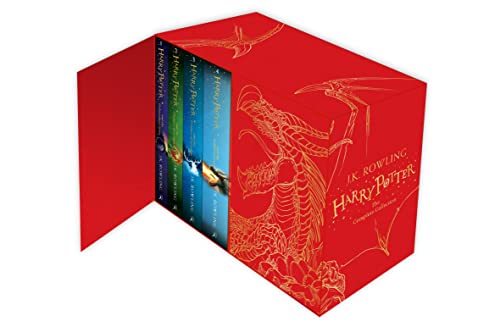 Book Description Bloomsbury Publishing PLC, United Kingdom, 2014. Hardback. Condition: New. Language: English. Brand new Book. Escape to Hogwarts with the unmissable series that has sparked a lifelong reading journey for children and families all over the world! Harry Potter has never even heard of Hogwarts when letters start dropping on the doormat at number four, Privet Drive. Addressed in green ink on yellowish parchment with a purple seal, they are swiftly confiscated by his grisly aunt and uncle. Then, on Harry's eleventh birthday, a great beetle-eyed giant of a man called Rubeus Hagrid bursts in with some astonishing news - Harry Potter is a wizard, and he has a place at Hogwarts School of Witchcraft and Wizardry. The magic starts here . These irresistible editions are presented in a striking scarlet box decorated with gold foiling, showing Harry on his broomstick flying past a fiery Hungarian Horntail dragon. This set is the essential Harry Potter - a must-have for every child at the start of the most magical reading adventure. These are books to be treasured and read time and time again, the greatest children's story of all time. Seller Inventory # BTY9781408856789

Book Description Educa Books, 2014. Hardcover. Condition: New. Boxed Set. Hardcover. A beautiful boxed set containing all seven Harry Potter novels in hardback. These new editions of the classic and internationally bestselling, multi-award-winning series feature instantly .Shipping may be from multiple locations in the US or from the UK, depending on stock availability. 3422 pages. 4.430. Seller Inventory # 9781408856789