Items related to Killers of the King: The Men Who Dared to Execute Charles...

Killers of the King: The Men Who Dared to Execute Charles I

Killers of the King: The Men Who Dared to Execute Charles I 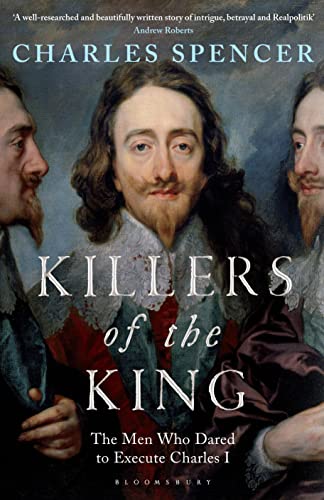 January, 1649. After seven years of fighting in the bloodiest war in Britain's history, Parliament had overpowered King Charles I and now faced a problem: what to do with a defeated king, a king who refused to surrender? Parliamentarians resolved to do the unthinkable, to disregard the Divine Right of Kings and hold Charles I to account for the appalling suffering and slaughter endured by his people. A tribunal of 135 men was hastily gathered in London, and although Charles refused to acknowledge the power of his subjects to try him, the death sentence was unanimously passed. On an icy winter's day on a scaffold outside Whitehall, in an event unique in English history, the King of England was executed. When the dead king's son, Charles II, was restored to the throne, he set about enacting a deadly wave of retribution against all those - the lawyers, the judges, the officers on the scaffold - responsible for his father's death. Some of the `regicides' - the killers of the king - pleaded for mercy, while others stoically awaited their sentence. Many went into hiding in England, or fled to Europe or America. Those who were caught and condemned suffered agonising and degrading ends, while others saw out their days in hellish captivity. Bestselling historian Charles Spencer explores this violent clash of ideals through the individuals whose fates were determined by that one, momentous decision. A powerful tale of revenge from the dark heart of royal history and a fascinating insight into the dangers of political and religious allegiance in Stuart England, these are the shocking stories of the men who dared to kill a king.

Charles Spencer was educated at Eton College and obtained his degree in Modern History at Magdalen College, Oxford. He is the author of four books, including the Sunday Times bestseller Blenheim: The Battle for Europe (shortlisted for History Book of the Year, National Book Awards) and Prince Rupert: The Last Cavalier.

A pacy, well-researched and beautifully written story of intrigue, betrayal and Realpolitik, but above all cold-blooded institutionalized revenge on a massive international scale * Andrew Roberts * Elegantly written ... A clever and illuminating book * The Times * Accomplished and gruesome, this masterful account of the fate of the regicides breaks all barriers in weaving the lives - and the grim fates - of many into a seamless, pacy and riveting read, underpinned by the depth of scholarship for which Charles Spencer is renowned. An exceptional and highly original history book that sheds new light on one of England's bloodiest episodes * Alison Weir * Imagine The Odessa File re-written by Christopher Hill, and you will have some idea of the pleasure to be had in reading Killers of the King. The virtues of a thriller and of scholarship are potently combined * Tom Holland * Outstanding: a thrilling tale of retribution and bloody sacrifice, unflinching idealism and craven miscreancy. In fluent, measured, often witty prose, Killers of the King brilliantly evokes that febrile time when the hunters became the hunted and vengeance was avenged. Like all the best history books, it succeeds not only in telling a remarkable story, but also in illuminating the entire age * Jessie Childs * Very good ... Dense and well-researched ... Some of the stories are extraordinary ... Spine-tingling detail * The Times * A colourful, blood-spattered account of the men who dared to execute Charles I - and how they were ruthlessly hunted down when his son, Charles II, was restored to the throne * The Lady * It reveals the shocking stories and fates of the men who signed the death warrant of Charles I who was executed in 1649 * Western Daily * Particularly intimate ... has benefitted from the earl's access to private papers * Observer * Brilliant ... Spencer gives us the gripping detective story about the hunt for the regicides across Britain and Europe ... A thrilling tale of pursuit and resistance ... based on deep original archival research * Independent * High-octane ... Spencer is a snappy storyteller * Guardian * Splendidly narrated but utterly gruesome ... gripping from first to last **** * Mail on Sunday * Spencer tells the stories of these escapees, including three men who fled as far away as North America, with great verve and skill ... It is gripping material and Spencer more than does it justice * Literary Review * Beautifully written and meticulously researched * Dan Jones, Evening Standard Books of the Year * Perfectly balanced ... One of the best books on the 17th century I have read since CV Wedgwood's book, The Trial of Charles I * A N Wilson, Evening Standard Books of the Year * History with the pace of a thriller and I learned much I never knew * Julian Fellowes, Observer Books of the Year * An excellent account of the regicides and their lives following the Restoration * Antony Beevor, Mail on Sunday Books of the Year * A sometimes grisly nonfiction thriller * Vanity Fair * Engaging, action-packed history of the demise of Britain's King Charles I * People *

1. Killers of the King: The Men Who Dared to Execute Charles I

Book Description Paperback. Condition: Very Good. The book has been read, but is in excellent condition. Pages are intact and not marred by notes or highlighting. The spine remains undamaged. Seller Inventory # GOR006299986

2. Killers of the King: The Men Who Dared to Execute Charles I

Book Description Bloomsbury Publishing PLC, 2014. Paperback. Condition: Good. Good condition is defined as: a copy that has been read but remains in clean condition. All of the pages are intact and the cover is intact and the spine may show signs of wear. The book may have minor markings which are not specifically mentioned. Most items will be dispatched the same or the next working day. Seller Inventory # wbb0013694280

3. Killers of the King: The Men Who Dared to Execute Charles I