Items related to Harry Potter and The Philosopher's Stone - Gryffindor... 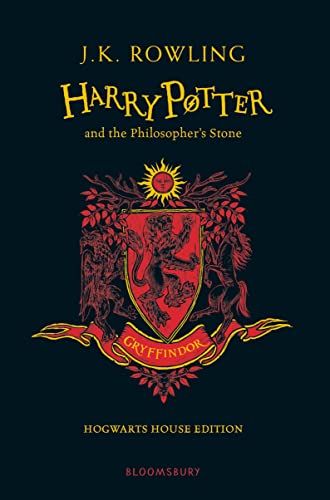 The amazing popularity of Harry Potter and the Sorcerer's Stone means that now even Muggles know about the Leaky Cauldron, Diagon Alley, and Hogwarts School of Witchcraft and Wizardry. Whether or not you've read about Harry, this unabridged audiobook brings his world to life. Reader Jim Dale brings an excellent range of voices to the characters, from well-meaning Hermione's soft, earnest voice to Malfoy's nasal droning; from Professor McGonagall's crisp brogue to Hagrid's broad Somerset accent; and from snarling Mr. Filch to p-p-poor, st-tuttering P-Professor Quirrel. Some of the characterizations are peculiar--why do the centaurs have Welsh accents?--but that's a small price to pay to hear one of the myriad ways to sing the Hogwarts School song. Harry Potter fans of all ages--Muggle or not--will enjoy curling up with a few chocolate frogs, a box of Bertie Bott's Every Flavor Beans ("Alas! Ear wax!"), and this marvelous, magical audiobook. (Running time: 8 hours, 6 cassettes) --Sunny Delaney

Harry Potter has no idea how famous he is. That's because he's being raised by his miserable aunt and uncle who are terrified Harry will learn that he's really a wizard, just as his parents were. But everything changes when Harry is summoned to attend an infamous school for wizards, and he begins to discover some clues about his illustrious birthright. From the surprising way he is greeted by a lovable giant, to the unique curriculum and colorful faculty at his unusual school, Harry finds himself drawn deep inside a mystical world he never knew existed and closer to his own noble destiny.

Book Description Hardcover. Condition: New. Dust Jacket Condition: New. 1st Edition. Fine condition. Bloomsbury, 2017. 20th Anniversary Edition. First UK edition-14th printing of this 20th anniversary edition (14). Black hardback (red lettering to the spine) with Dj(two small nicks on the edges of the Dj cover), both in fine condition. Illustrated with b/w drawings,map. Illustrations by Levi Pinfold. The book is new with a very small crease on the edges of the pages. 359pp including Gryffindor: An Introduction, J.K. Rowling- Twenty Years of Magic,Price un-clipped. This is another paragraph Book Description: Celebrate 20 years of Harry Potter magic with four special editions of Harry Potter and the Philosopher's Stone. Gryffindor, Slytherin, Hufflepuff, Ravenclaw . Twenty years ago these magical words and many more flowed from a young writer's pen, an orphan called Harry Potter was freed from the cupboard under the stairs - and a global phenomenon started. Harry Potter and the Philosopher's Stone has been read and loved by every new generation since. To mark the 20th anniversary of first publication, Bloomsbury is publishing four House Editions of J.K. Rowling's modern classic. These stunning editions will each feature the individual house crest on the jacket and line illustrations exclusive to that house, by Kate Greenaway Medal winner Levi Pinfold. Exciting new extra content will include fact files and profiles of favourite characters, and each book will have sprayed edges in the house colours. Available for a limited period only, these highly collectable editions will be a must-have for all Harry Potter fans in 2017. Seller Inventory # 10075

Shipping: US$ 26.24
From United Kingdom to U.S.A.
Destination, rates & speeds