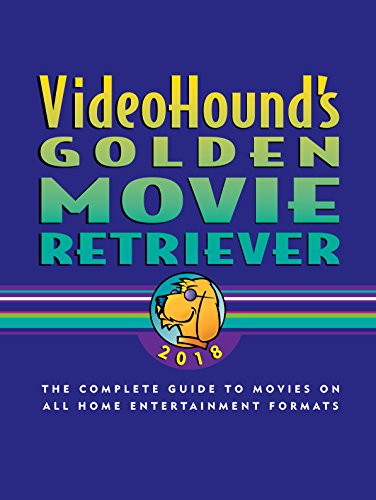 VideoHound's Golden Movie Retriever 1998 is the most comprehensive single-volume film guide you can buy. It contains capsule reviews of more than 22,000 movies, written with wit and good humor; the films are rated in a range from "four bones" to "WOOF!" Each entry notes the year the film was released; its running time; its availability on videocassette, laserdisc, and DVD; its chief credits; and whether the film was made in black and white or color. Unlike many rival guides, the Retriever includes made-for-television movies, straight-to-video releases, miniseries, and television shows that are currently available on video. But that's not all: the second half of the volume is an enormous book of lists, making it a valuable film encyclopedia as well. The award index covers not only the Oscars, the BAFTA Awards, and the Cannes Film Festival winners, but also the Golden Globe, the Canadian Genie, the Independent Spirit, and the MTV Movie Awards. VideoHound's Golden Movie Retriever 1998 categorizes films by their country of origin and by director, star, writer, cinematographer, and composer. If you want to find information on the World Wide Web, check out the directory of the best film Web sites. Best of all is the category index, which catalogues movies according to conventional genres ("Comedy," "Film Noir," "Romance") and also under topics as wild and diverse as "Murderous Children," "Flatulence," "Satire and Parody," "Cyberpunk," "Marriage," "L.A." and "Nuns with Guns." VideoHound's Golden Movie Retriever 1998is a lively and entertaining guide that will point you toward new experiences in film and strengthen your cinematic expertise.

We’ve even checked it twice. Probably more — depending on which editor you ask! And what a gift the VideoHound Golden Movie Retriever 2006 has in store for its readers...

While others are downsizing, we’re still super-duper sizing our guide. And it’s still the same price. That means more reviews (Nearly 1,000 more), more information, and more complete indexes than any other review guide out there.

Always reviewing to the beat of its own little drummer boy (OK, it’s a stretch, but it’s keeping with the misplaced holiday theme), the newest VideoHound builds on it’s legacy of playful, yet dead-on reviews and cross-referencing not found elsewhere that makes movie trivia and even crossword puzzles a breeze.