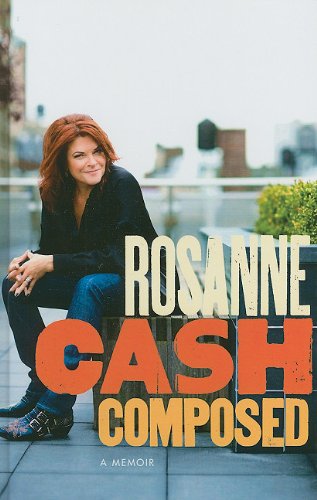 The acclaimed country-music performer and songwriter recounts her upbringing by a famous father and stepmother, marriages to Rodney Crowell and John Leventhal and journey through the professional music entertainment world. (biography & autobiography).

Rosanne Cash looks back on her life as an artist, a songwriter, and an heir to an incredible industry legend in Composed. Here, she’s provided readers with a special playlist—along with behind-the-music liner notes--that puts her unique life story to music. You can also sample and download these songs in our custom MP3 playlist.

"Sleeping In Paris" (1993)
I wrote this just before I went to Paris in 1990. It became a metaphor for resolving things that could not be resolved.


"Seven Year Ache" (1981)
This song began as a long poem, three or four pages long, and I distilled it down into the song it became. I wrote it when Rickie Lee Jones first album was out, and it was really influential for me. I was thinking that I didn't know any country songs about being on the streets, or street life, and I wanted to write one. This was my attempt.

"On The Inside" (1990)
This is the first track on my album "Interiors." The whole album was about the difference between what is going on inside, and what you show the world on the outside.

"Rules of Travel" (2003)
I wrote the chorus to this YEARS before the whole song was finished. It became the title song of the album. I still think it is one of the best choruses I've written.

"Dreams Are Not My Home" (2006)
I was in Cambridge, England, playing at the Folk Festival, and my daughter and I climbed to the top of an ancient church, and I looked out over the River Cam and a picture unfolded in my mind, of the river rising, and Chelsea and I flying away. All the images in the song are dream-like, and the chorus is a longing to break free of the dreams.

"House on The Lake" (1980)
John Leventhal and I wrote this song, and it's full of detail about the home my dad and stepmother lived in. It's from the album 'Black Cadillac'. Many of those songs are about loss, but this one is also about what remains-- the love and memories.

"The Way We Make A Broken Heart" (1987)
This song is written by the great John Hiatt, one of my favorite songwriters. It was a big hit for me on the country charts in the 90's. It was an innovative record and just such a beautiful song.

"Like Fugitives" (2006)
This was the last song I wrote for my album "Black Cadillac," shortly after my mother died. I was angry and sad, and I didn't pull any punches, lyrically.

"Black Cadillac" (2006)
This was the first song I wrote for my album "Black Cadillac." It was like a 'postcard from the future'. Everyone started dying after I wrote this.

"She's Got You" (1986)
This song was written by the great songwriter Hank Cochran, and it was made famous by Patsy Cline. I had to get Patsy's voice out of my head to even approach singing this! I finally just asked her to help me. It seemed to work.

ROSANNE CASH has recorded fourteen albums charting twenty-one Top 40 country singles, 11 of which made it to # 1, and two gold records. She has received ten Grammy nominations—winning in 1985—and was nominated this year for “Sea of Heartbreak,” a duet with Bruce Springsteen on her current CD, The List. Cash achieved the highest chart position of her career with the debut of The List. The album, which Vanity Fair called “superb,” debuted in the Top 5 on the Country Chart, and entered The Billboard 200 at No. 22. Cash is the author of Bodies of Water and the children’s book Penelope Jane: A Fairy’s Tale. Her essays and fiction have been published in The New York Times, Rolling Stone, and New York magazine. She lives in New York City with her husband and children.