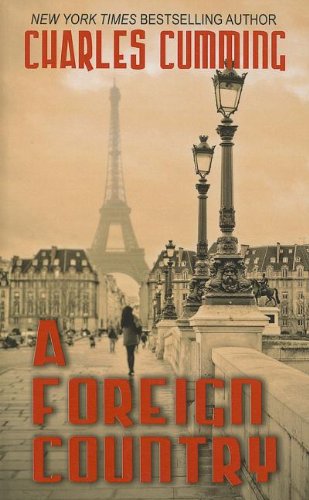 When a newly appointed first female Chief of MI6 disappears weeks after two possibly related cases, disgraced former MI6 officer Thomas Kell is offered a chance to redeem his career by conducting a discreet operation that uncovers a shocking conspiracy. By the best-selling author of The Trinity Six. (espionage).

On the vacation of a lifetime in Egypt, an elderly French couple is brutally murdered. Then, days later, on the streets of Paris, a young French accountant is kidnapped. When Amelia Levene, who in six weeks is due to take over as the first female Chief of MI6, disappears without a trace while in the south of France, it is the gravest crisis MI6 has faced in more than a decade. Desperate not only to find her but to keep the press from learning that she has gone missing, Britain's top intelligence agents turn to one of their own: disgraced former MI6 officer Thomas Kell.

"Eat your heart out, Daniel Craig...Cumming vividly showcases the undercover life of spies."―GQ

Tossed out of the Service only months before, Kell is given one final chance to redeem himself―all he has to do is find Amelia Levene: quickly, quietly, and at any cost. Following a trail that leads him to France and then Tunisia, Kell uncovers a shocking secret and a conspiracy that could have unimaginable repercussions for Britain and its allies. All that stands in the way of personal and political catastrophe is Kell himself...

Book Description Thorndike Press, 2012. Condition: Good. Lrg. Ships from Reno, NV. Shows some signs of wear, and may have some markings on the inside. Seller Inventory # GRP96678304

Book Description Thorndike Press, 2012. Condition: Good. A+ Customer service! Satisfaction Guaranteed! Book is in Used-Good condition. Pages and cover are clean and intact. Used items may not include supplementary materials such as CDs or access codes. May show signs of minor shelf wear and contain limited notes and highlighting. Seller Inventory # 1410452476-2-4