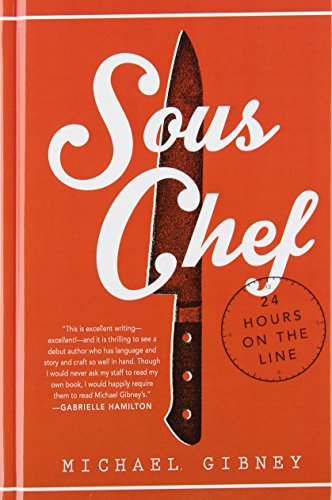 An executive sous chef who has worked alongside cooks from some of the nation's leading restaurants documents an intense twenty-four-hour period that illuminates the allures and adversities of a professional culinary life.

An Amazon Best Book of the Month, April 2014: Reading Michael Gibney's Sous Chef--a debut that plays at the outer bounds of memoir--may be the closest most of us will ever come to living a day as the second-in-command at a Michelin-starred New York City restaurant. Written in the second person, it's intense and immediately devourable. Sous Chef has all the drama, disaster, and triumph people have come to expect from reality restaurant TV, but far more intimate and nuanced. On every page, Gibney turns out phrases to savor: this is kitchen writing on par with Gabrielle Hamilton's Blood, Bones & Butter. No one who’s read Anthony Bourdain’s Kitchen Confidential will be surprised by the more licentious elements, but the real thrills are those transcendent moments when every player is absorbed by their role, moving together to assemble a fantastic meal. In Gibney’s hands, the anonymous act of preparing and serving great food to ravenous multitudes feels authentically noble, verging on heroic. --Mari Malcolm

Michael Gibney began working in restaurants at the age of sixteen and assumed his first sous chef position at twenty-two. He ascended to executive sous chef at Tavern on the Green, where he managed an eighty-person staff. He has worked in the kitchens of Morgans Hotel Group, 10 Downing in Manhattan, and Governor in Brooklyn's DUMBO, among many others. Over the course of his career, he has had the opportunity to work alongside cooks and chefs from many of the nation's best restaurants, including Alinea, Per Se, Eleven Madison Park, Daniel, Jean Georges, Le Bernardin, Bouley, Ducasse, Corton, wd 50, and Momofuku. In addition to his experience in the food service industry, Gibney also holds a BFA in painting from Pratt Institute and an MFA in nonfiction writing from Columbia University. He lives in Brooklyn, New York.