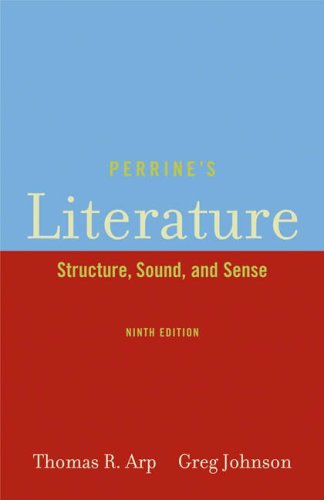 The best-seller for nearly 50 years and the introduction to literature textbook that first set the standard for including a wide range of engaging and diverse forms of literature, Arp/Johnson/Perrine continues to be the most inclusive anthology of fiction, poetry, and drama.

Thomas R. Arp received a B.A. in English from the University of Michigan (1954) and a Woodrow Wilson Fellowship to Stanford University. In 1955-1956, he produced educational television for the University of Michigan. He received an M.A. in 1960 and a Ph.D. in 1962 -- both from Stanford. He taught at Bowdoin College, Princeton University, University of California at Berkeley, Hull University (England), and Southern Methodist University. Macmillan published his volume THE FORM OF POETRY in 1966, and he received a Fulbright lectureship at University of Bucharest (Romania) in 1969-1970. Arp joined Laurence Perrine in preparing revised editions of SOUND AND SENSE, STORY AND STRUCTURE, and LITERATURE: STRUCTURE, SOUND, AND SENSE beginning in 1982. He became sole author of the books in 1997 and was joined by Greg Johnson in 2002. Dr. Arp passed away in 2015.

Greg Johnson received an M.A. in English from Southern Methodist University and a Ph.D. in English from Emory University. Dr. Johnson is the author of 12 books of fiction, poetry, criticism, and biography, including LAST ENCOUNTER WITH THE ENEMY (Johns Hopkins, 2004), WOMEN I'VE KNOWN: NEW AND SELECTED STORIES (Ontario Review, 2007), the novel STICKY KISSES (Alyson Books, 2001), and several books on Joyce Carol Oates, including INVISIBLE WRITER: A BIOGRAPHY OF JOYCE CAROL OATES (Dutton, 1998) and JOYCE CAROL OATES: CONVERSATIONS 1970-2006 (Ontario Review, 2006). He joined the author team of PERRINE'S LITERATURE in 2002 and has been the sole author since Thomas Arp's passing in 2015.