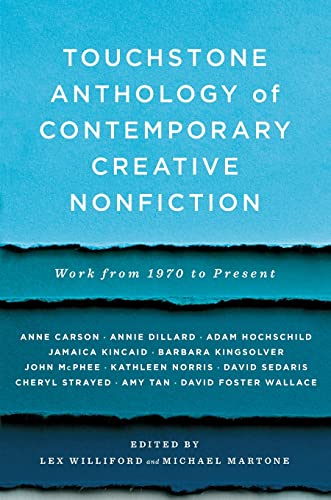 From memoir to journalism, personal essays to cultural criticism, this indispensable anthology brings together works from all genres of creative nonfiction, with pieces by fifty contemporary writers including Cheryl Strayed, David Sedaris, Barbara Kingsolver, and more.

Selected by five hundred writers, English professors, and creative writing teachers from across the country, this collection includes only the most highly regarded nonfiction work published since 1970.

Michael Martone has taught at Iowa State University, Harvard University, and Syracuse University. He is currently teaching at the University of Alabama, where he has directed the MFA Program in Creative Writing. Double-wide: Collected Fiction is his eighth book of stories. Racing in Place, his third book of nonfiction, will be published in 2008. He has edited six other volumes of prose including the Touchstone Anthology of Contemporary Creative Nonfiction with Lex Williford. He lives in Tuscaloosa, Alabama.

There is a kind of writing that begins from the impulse to make things up, to invent a situation and see how it unfolds, to create characters and see what they do. Since around 1600, such writing has been called fiction, from a Latin root meaning "to feign" or "to counterfeit." In making fiction, the writer freely goes wherever imagination leads. The only requirement is that the counterfeit be sufficiently compelling to engage the reader's attention from the first line to the last.

Writing may also begin from a contrary impulse, not to make things up, but to record and examine something the writer has actually witnessed, lived through, learned about, or pondered. Such writing can range from history and philosophy to manifestos and memoirs, from the formality of footnoted tomes to the pizzazz of slangy blogs. What all such writing has in common is faithfulness to some reality that the writer did not invent -- to a shared history, to real people, to actual events, to places one can visit, to facts one can check. For better or worse, this wildly diverse range of writing has come to be called, by contrast with the freely invented kind, nonfiction.

Dividing the realm of prose literature into fiction and nonfiction is clumsy at best, rather like dividing the realm of animals into birds and nonbirds. It might be technically correct to describe giraff es and june bugs as nonbirds, but it would not tell us anything about giraff es or june bugs, or birds. Nor is it useful to lump together a four-volume saga of the Crusades and a four-page celebration of croissants under the single label of nonfi ction. Judging from the earliest citations of the word in the Oxford English Dictionary, the label was imposed by nineteenth-century librarians, who began dividing their books into the twin categories of fiction and nonfi ction (originally with a hyphen). I suspect they did so, at least in America, to emphasize the portion of a library's holdings that were solid, sober, useful, uplifting, and, above all, true, such as encyclopedias and repair manuals and religious tracts, as opposed to the romances, poetry, mysteries, fantasies, westerns, pirate adventures, thrillers, dime novels, and other frivolous books that wasted readers' time and corrupted youth and made no mill wheels turn.

Whatever the origins of the nonfi ction label, the publishers soon picked it up, and then so did bookstores, critics, and teachers, and now, clumsy though it may be, we are stuck with it. One virtue of the term is that the sly little prefix non- implies a promise -- that such literature is neither feigned nor counterfeit; it is answerable not merely to the writer's imagination but to a world beyond the page, a world that precedes and surrounds and outlasts the act of writing.

Of course, these two contrary impulses -- to freely invent a world or to report on the actual world -- rarely exist in pure form. Fiction must draw on the familiar world if it is to be comprehensible, and nonfi ction must draw on the writer's imagination if it is to come alive. Ask a roomful of writers how far a work may be shaped by imagination before it no longer deserves to be called nonfiction, and you'll receive a roomful of answers. Most likely all will agree on the necessity of choosing, from the myriad of possible details, those that are essential to the story and leaving out the rest; many writers will accept the filling-in of memory's blank spaces with vivid details; some will permit the merging of incidents or characters to streamline the account; and a few will claim the right to add, drop, change, or invent anything that enlivens the work.

While we may debate where the line should be drawn, at some point along that spectrum, nonfi ction gives way to fi ction. When a writer crosses over the line and still claims to be off ering nonfiction, it's usually for the sake of selling more books. Why does it sell more books? Because, in a culture awash with phoniness, we hunger for authenticity. We're so weary of hucksters, talk-show ranters, ideological hacks, inane celebrities, sleazy moralists, and posturing politicians that we long to hear voices speaking from the heart rather than from a script. Amid so much fakery, hypocrisy, and outright fraud, we long for the genuine. Knowing this, television producers manufacture "reality" shows, filmmakers promote movies as "based on a true story," and some authors, with the connivance of their publishers, fabricate a sensational tale and call it a memoir. In a culture besotted by marketing, we shouldn't be surprised by such deceit.

Dressing up a fabrication as a true report is not essentially diff erent from costuming an actor in a white coat to peddle a drug or wrapping a military invasion in the fl ag to make it appear as a blow for freedom. Lying to sell a book is not as serious an off ense as lying to sell a drug or a war, but it's a lie nonetheless.

Beyond insisting on the writer's responsibility to a world outside the page, the nonfiction label doesn't tell us much. To think and speak in a more precise way about this rich array of literature, we need more precise language. Just as we have names for a host of animals, from aardvarks to zebras, that might be grouped under "nonbirds," so we have names for many species of nonfiction: biographies, profiles, travelogues, spiritual writing, sports writing, science writing, literary journalism, documentaries, speeches, letters, memoirs, and essays, to list a few.

Of all these nonfiction species, the most versatile and exemplary is, in my view, the essay. This quirky and inquisitive mode of writing was named, and more or less invented, by a sixteenth-century Frenchman, Michel de Montaigne. He derived the name essai from a French verb meaning to make a trial of something, the way one assays an ore to determine its value. The term suggests an experiment, a testing, a weighing out. For Montaigne, an essay was an effort to make sense of life -- not the whole of life, but some confusing or intriguing portion of it. Thus he wrote about the pleasures of idleness and the rigors of old age, about cannibals and warfare and thumbs. His motto was, "What do I know?" Read ironically, that question is self-effacing, as if to say, "Who am I to have an opinion on such matters?" Read straight, the question challenges the writer to discover what, at this moment and within the inevitable constraints of ignorance, he takes to be true -- about himself, about our baffling existence, about the universe. It's not coincidental that Montaigne invented the essay at roughly the same time as Francis Bacon, Descartes, Galileo, and others were inventing the modern scientific method. Instead of relying on scripture, mythology, astrology, or past authority to explain the workings of nature, scientists conducted experiments. They formulated a hypothesis, carefully tested it, published their results for others to confi rm or refute, and then went on to create a more refi ned hypothesis. Since it is a collective endeavor in a way that art rarely is, science might take as its motto, "What do we know, and how do we know it?"

Experiments in language are messier than experiments in laboratories, because words do not parse the universe as neatly as numbers do, but the spirit behind both kinds of experiment is the same: to discover a tentative truth. For the essayist as for the scientist, the truth must be tentative rather than final, because further inquiry may deepen or clarify or overturn our understanding. The essay is not the only kind of literature that seeks to discover and articulate provisional truths about our existence. Poems and plays, stories and novels, along with other kinds of nonfiction do so as well. But the essay seems to me the purest expression of this impulse, which is why I call it exemplary. With a lineage stretching back five centuries and including such noteworthy practitioners as Henry David Thoreau, Virginia Woolf, George Orwell, and James Baldwin, the essay has enjoyed a flowering in our own time. It is a wide-open form, skeptical and reflective, lending itself to humor as well as solemnity, well suited to an age of multiplying possibilities and dwindling certainties. Readers as well as writers are drawn to the form because it allows for an examination of our most powerful and bewildering experiences. The worthiest essays are ventures into the unknown, from which we return bearing fresh insights and delights.

We are a question-asking animal. Th at is our burden and our glory. It's a burden because, unlike creatures governed entirely by instinct, we puzzle over how to behave, we wonder about where we've come from and where we're going and what, if anything, the journey means. This inveterate questioning is also our glory because it leads to our finest achievements -- to physics and philosophy, to poetry and painting, to cosmologies and essays -- to all the ways we ponder and praise this life, this universe, into which we've been so mysteriously born.

Since my coeditor, Michael Martone, and I had already decided to use a sophisticated democratic online survey of teaching writers for the second edition of The Scribner Anthology of Contemporary Short Fiction, we thought that another survey like it might also be an excellent opportunity to poll teaching writers about the most compelling contemporary nonfi ction they've read and taught in their creative writing workshops and their composition and literature classes. Thus began the long, arduous process of publishing the first edition of the Touchstone Anthology of Contemporary Creative Nonfiction.

Not long after September 11, 2001, Simon & Schuster's David Rosenthal described to Edward Wyatt of the New York Times what he saw as a recent trend in the reading public away from fiction to nonfiction: "If there's any theme, it's that people only want to read the truth." Following the attacks on the World Trade Center, Rosenthal continued, "readers flocked to nonfiction works." Si...

Touchstone Anthology of Contemporary Creative Nonfiction : Work from 1970 to the Present

Touchstone Anthology of Contemporary Creative Nonfiction: Work from 1970 to the Present Paperback