Items related to When the Light Goes: A Novel

McMurtry, Larry When the Light Goes: A Novel 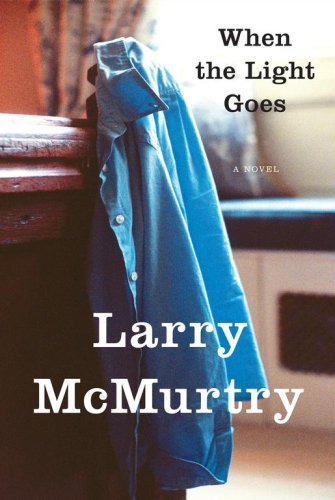 A sequel to Duane's Depressed by the Oscar-winning screenplay writer for Brokeback Mountain finds widower Duane Moore returning to west Texas, where he finds the family oil business significantly altered by new personnel, evolving family dynamics, and his own perspective changes. 150,000 first printing.

Larry McMurtry is the author of twenty-nine novels, including the Pulitzer Prize-winning Lonesome Dove. His other works include two collections of essays, three memoirs, and more than thirty screenplays, including the coauthorship of Brokeback Mountain, for which he received an Academy Award. He lives in Archer City, Texas.

In his now-classic debut novel, The Last Picture Show(1966), McMurtry introduced readers to a dying Texas town called Thalia and a lively teenager named Duane Moore. McMurtry revisited both in his novels Texasville (1987) and Duane's Depressed (1999), rendering Duane as a sort of West Texas equivalent of Updike's Rabbit Angstrom. McMurtry's latest novel begins with Duane, now 65, returning from an overseas sabbatical designed to relieve his grief for his deceased wife. He finds that his life in Thalia has receded; his children have all moved on, his oil company is successful without him, and he is utterly alone. In walks Annie, a young blond and new employee at the company. Annie flirts with Duane but soon reveals that--despite her 27 years--she knows almost nothing about sex. Duane hasn't learned much either but is willing to share his meager education with Annie. McMurtry keeps the sexual play frank--too frank, with descriptions of Duane's impotence falling under the heading of too much information Although Duane is surprised by his late-blooming sexuality, readers won't be, and his prolonged malaise deadens the impact of his self-discovery. Still, it's nice to know what ultimately becomes of old Duane--even if it isn't particularly enthralling. Jerry Eberle
Copyright © American Library Association. All rights reserved

When the Light Goes : A Novel