Items related to Darkness at Noon 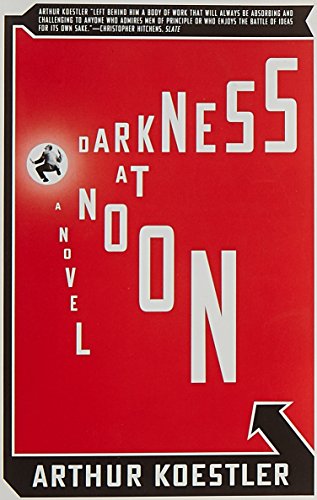 Originally published in 1941, Arthur Koestler's modern masterpiece, Darkness At Noon, is a powerful and haunting portrait of a Communist revolutionary caught in the vicious fray of the Moscow show trials of the late 1930s.

During Stalin's purges, Nicholas Rubashov, an aging revolutionary, is imprisoned and psychologically tortured by the party he has devoted his life to. Under mounting pressure to confess to crimes he did not commit, Rubashov relives a career that embodies the ironies and betrayals of a revolutionary dictatorship that believes it is an instrument of liberation.

A seminal work of twentieth-century literature, Darkness At Noon is a penetrating exploration of the moral danger inherent in a system that is willing to enforce its beliefs by any means necessary.

Arthur Koestler (1905-1983) was a Hungarian-British author and journalist who immersed himself in the major ideological and social conflicts of his time. In 1931 Koestler joined the Communist Party of Germany until, disillusioned by Stalinism, he resigned in 1938. In 1940 he published his novel Darkness at Noon, an anti-totalitarian work that gained him international fame. Over the course of his life, Koestler espoused many political causes. His novels, reportage, autobiographical works, and political and cultural writings established him as an important commentator on the dilemmas of the twentieth century.

Nobody can rule guiltlessly.-- Saint-Just

The cell door slammed behind Rubashov.

He remained leaning against the door for a few seconds, and lit a cigarette. On the bed to his right lay two fairly clean blankets, and the straw mattress looked newly filled. The wash-basin to his left had no plug, but the tap functioned. The can next to it had been freshly disinfected, it did not smell. The walls on both sides were of solid brick, which would stifle the sound of tapping, but where the heating and drain pipe penetrated it, it had been plastered and resounded quite well; besides, the heating pipe itself seemed to be noise-conducting. The window started at eye level; one could see down into the courtyard without having to pull oneself up by the bars. So far everything was in order.

He yawned, took off his coat, rolled it up and put it on the mattress as a pillow. He looked out into the yard. The snow shimmered yellow in the double light of the moon and the electric lanterns. All round the yard, along the walls, a narrow track had been cleared for the daily exercise. Dawn had not yet appeared; the stars still shone clear and frostily, in spite of the lanterns. On the rampart of the outside wall, which lay opposite Rubashov's cell, a soldier with slanted rifle was marching the hundred steps up and down; he stamped at every step as if on parade. From time to time the yellow light of the lanterns flashed on his bayonet.

Rubashov took his shoes off, still standing at the window. He put out his cigarette, laid the stump on the floor at the end of his bedstead, and remained sitting on the mattress for a few minutes. He went back to the window once more. The courtyard was still; the sentry was just turning; above the machine-gun tower he saw a streak of the Milky Way.

Rubashov stretched himself on the bunk and wrapped himself in the top blanket. It was five o'clock and it was unlikely that one had to get up here before seven in the winter. He was very sleepy and, thinking it over, decided that he would hardly be brought up for examination for another three or four days. He took his pince-nez off, laid it on the stone-paved floor next to the cigarette stump, smiled and shut his eyes. He was warmly wrapped up in the blanket, and felt protected; for the first time in months he was not afraid of his dreams.

When a few minutes later the warder tuned the light off from outside, and looked through the spy-hole into his cell, Rubashov, ex-Commissar of the People, slept, his back turned to the wall, with his head on his outstretched left arm, which stuck stiffly out of the bed; only the hand on the end of it hung loosely and twitched in his sleep.

Copyright © 1941 by The Macmillan Company