Items related to Blaze: A Novel 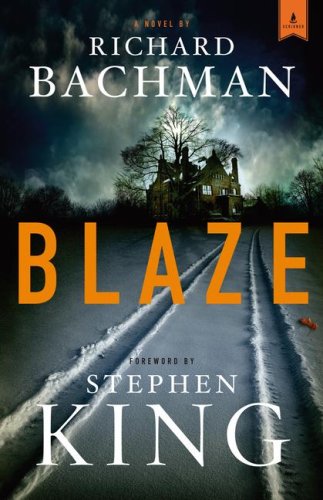 Originally written thirty-five years ago but never published, an evocative crime novel chronicles the life and times of Clayton Blaisdell, Jr.--the crimes committed against him and the crimes he himself commits, including a kidnapping he is doomed to attempt. 1,000,000 first printing.

About the Author:
During the years 1966-1973, Stephen King was actually two men. Stephen King wrote (and sold) horror stories to magazines such as Cavalier and Adam, while Richard Bachman wrote a series of novels that would not be published until the early 1980s and were then collected as The Bachman Books. Bachman died of pseudonym cancer in 1985, shortly after another of his novels, Thinner, was attributed to Stephen King; but a sixth Bachman novel, The Regulators, surfaced in 1995 and was published simultaneously with Stephen King's Desperation, to which it bore a weird resemblance. Blaze -- both brutal and sensitive -- was the last novel written during Bachman's early period. It is his legacy.

King's proceeds from Blaze will be donated to The Haven Foundation, which supports freelance artists.

Ron McLarty has appeared on Broadway in That Championship Season, Our Country's Good, and Moonchildren. His film credits include Two Bits, The Postman, and The Flamingo Kid. He has starred on television in Spenser for Hire and Cop Rock. Mr. McLarty is also a novelist and an award-winning playwright.
Excerpt. © Reprinted by permission. All rights reserved.:
Blaze by Richard BachmanForeword by Stephen KingFull Disclosure

This is a trunk novel, okay? I want you to know that while you've still got your sales slip and before you drip something like gravy or ice cream on it, and thus make it difficult or impossible to return. It's a revised and updated trunk novel, but that doesn't change the basic fact. The Bachman name is on it because it's the last novel from 1966-1973, which was that gentleman's period of greatest productivity.

During those years I was actually two men. It was Stephen King who wrote (and sold) horror stories to raunchy skin-mags like Cavalier and Adam, but it was Bachman who wrote a series of novels that didn't sell to anybody. These included Rage, The Long Walk, Roadwork, and The Running Man. All four were published as paperback originals.

Blaze was the last of those early novels?the fifth quarter, if you like. Or just another well-known writer's trunk novel, if you insist. It was written in late 1972 and early 1973. I thought it was great while I was writing it, and crap when I read it over. My recollection is that I never showed it to a single publisher -- not even Doubleday, where I had made a friend named William G. Thompson. Bill was the guy who would later discover John Grisham, and it was Bill who contracted for the book following Blaze, a twisted but fairly entertaining tale of prom-night in central Maine.

I forgot about Blaze for a few years. Then, after the other early Bachmans had been published, I took it out and looked it over. After reading the first twenty pages or so, I decided my first judgment had been correct, and returned it to purdah. I thought the writing was okay, but the story reminded me of something Oscar Wilde once said. He claimed it was impossible to read "The Old Curiosity Shop" without weeping copious tears of laughter. So Blaze was forgotten, but never really lost. It was only stuffed in some corner of the Fogler Library at the University of Maine with the rest of their Stephen King/Richard Bachman stuff.

Blaze ended up spending the next thirty years in the dark. And then I published a slim paperback original called The Colorado Kid with an imprint called Hard Case Crime. This line of books, the brainchild of a very smart and very cool fellow named Charles Ardai, was dedicated to reviving old "noir" and hardboiled paperback crime novels, and publishing new ones. The Kid was decidedly softboiled, but Charles decided to publish it anyway, with one of those great old paperback covers. The whole project was a blast?except for the slow royalty payments.

About a year later, I thought maybe I'd like to go the Hard Case route again, possibly with something that had a harder edge. My thoughts turned to Blaze for the first time in years, but trailing along behind came that damned Oscar Wilde quote about "The Old Curiosity Shop." The Blaze I remembered wasn't hardboiled noir, but a three-handkerchief weepie. Still, I decided it wouldn't hurt to look. If, that was, the book could even be found. I remembered the carton, and I remembered the squarish type-face (my wife Tabitha's old college typewriter, an impossible-to-kill Olivetti portable), but I had no idea what had become of the manuscript that was supposedly inside the carton. For all I knew, it was gone, baby, gone.

It wasn't. Marsha, one of my two valuable assistants, found it in the Fogler Library. She would not trust me with the original manuscript (I, uh, lose things), but she made a Xerox. I must have been using a next-door-to-dead typewriter ribbon when I composed Blaze, because the copy was barely legible, and the notes in the margins were little more than blurs. Still, I sat down with it and began to read, ready to suffer the pangs of embarrassment only one's younger, smart-assier self can provide.

But I thought it was pretty good -- certainly better than Roadwork, which I had, at the time, considered mainstream American fiction. It just wasn't a noir novel. It was, rather, a stab at the sort of naturalism-with-crime that James M. Cain and Horace McCoy practiced in the thirties. I thought the flashbacks were actually better than the front-story. They reminded me of James T. Farrell's Young Lonigan trilogy and the forgotten (but tasty) Gas-House McGinty. Sure, it was the three Ps in places, but it had been written by a young man (I was twenty-five) who was convinced he was WRITING FOR THE AGES.

I thought Blaze could be re-written and published without too much embarrassment, but it was probably wrong for Hard Case Crime. It was, in a sense, not a crime novel at all. I thought it could be a minor tragedy of the underclass, if the re-writing was ruthless. To that end, I adopted the flat, dry tones which the best noir fiction seems to have, even using a type-font called American Typewriter to remind myself of what I was up to. I worked fast, never looking ahead or back, wanting also to capture the headlong drive of those books (I'm thinking more of Jim Thompson and Richard Stark here than I am of Cain, McCoy, or Farrell). I thought I would do my revisions at the end, with a pencil, rather than editing in the computer, as is now fashionable. If the book was going to be a throwback, I wanted to play into that rather than shying away from it. I also determined to strip all the sentiment I could from the writing itself, wanted the finished book to be as stark as an empty house without even a rug on the floor. My mother would have said "I wanted its bare face hanging out." Only the reader will be able to judge if I succeeded.

If it matters to you (it shouldn't -- hopefully you came for a good story, and hopefully you will get one), any royalties or subsidiary income generated by Blaze will go to The Haven Foundation, which was created to help freelance artists who are down on their luck.

One other thing, I guess, while I've got you by the lapel. I tried to keep the Blaze time-frame as vague as possible, so it wouldn't seem too dated. It was impossible to take out all the dated material, however; keeping some of it was important to the plot. If you think of this story's time-frame as "America, Not All That Long Ago," I think you'll be okay.

May I close by circling back to where I started? This is an old novel, but I believe I was wrong in my initial assessment that it was a bad novel. You may disagree?but "The Old Curiosity Shop" it ain't. As always, Constant Reader, I wish you well, I thank you for reading this story, and I hope you enjoy it. I won't say I hope you mist up a little, but --

Yeah. Yeah, I will say that. Just as long as they're not tears of laughter.