Items related to The Islands of the Blessed (Sea of Trolls, Book 3)

Farmer, Nancy The Islands of the Blessed (Sea of Trolls, Book 3) 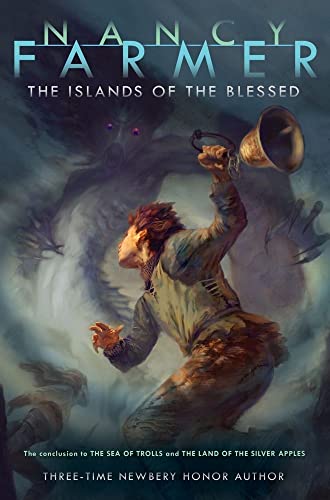 In this much-anticipated conclusion to the Sea of Trolls trilogy, Notland is no place to seek one’s true calling. Or is it?

Nancy Farmer has written three Newbery Honor books: The Ear, the Eye and the Arm; A Girl Named Disaster; and The House of the Scorpion, which also won the National Book Award and the Printz Honor. Other books include The Lord of Opium, The Sea of Trolls, The Land of the Silver Apples, The Islands of the Blessed, Do You Know Me, The Warm Place, and three picture books for young children. She grew up on the Arizona-Mexico border and now lives with her family in the Chiricahua Mountains of Arizona.

THE ISLANDS OF THE BLESSED Chapter One


Jack’s fingers ached and blisters had formed on the palms of his hands. Once he could have done this work without harm. Once his skin had been covered with comfortable calluses, protecting him from the slippery handle of the sickle, but no longer. For three years he’d been freed of farmwork. He’d spent his time memorizing poetry and plucking away at a harp—not that he’d ever equaled the Bard. Or ever would.

Sweat ran down his forehead. Jack wiped his face and only succeeded in getting dirt into his eyes. “Curse this job!” he cried, hurling the sickle to the earth.

“At least you have two hands,” said Thorgil, sweating and laboring nearby. She had to hold the bracken ferns in the crook of her arm and slice through them with her knife. Her right hand was frozen, useless, yet she didn’t give up. It both impressed and annoyed Jack.

“Why can’t someone else do this?” he complained, sitting down in the springy bracken.

“Even Thor does inglorious chores when he’s on a quest,” said Thorgil, stolidly dumping an armload of bracken into a growing pile. She turned to gather more.

“This is no quest! This is thrall work.”

Jack’s face turned even hotter as he remembered how he’d been a slave in the Northland. But he swallowed the obvious response that Thorgil herself had been a thrall as a child. She was prey to dark moods that rippled out to blight everyone around her. That was the word for her, Jack thought grimly. She was a blight, a kind of disease that turned everything yellow.

Nothing had worked out since she’d arrived in the village. It took the utmost threats from the Bard to keep her from revealing that she was a Northman, one of the murdering pirates who’d descended on the Holy Isle. Even as it was, the villagers were suspicious of her. She refused to wear women’s clothes. She took offense readily. She was crude. She was sullen. In short, she was a perfect example of a Northman.

And yet, Jack had to remind himself, she had their virtues too—if you could call anything about Northmen virtuous. Thorgil was brave, loyal, and utterly trustworthy. If only she were more flexible!

“If you’d shift your backside, I could harvest that bracken. Or were you planning on using it as a bed?” Thorgil said.

“Oh, shut up!” Jack snatched up his sickle and winced as a blister broke on his hand.

They worked silently for a long time. The sun sent shafts of heat into the airless woodland. The sky—what they could see of it—was a cloudless blue. It pressed down on them like an inverted lake—hot, humid, and completely still. Jack found it hard to believe that a storm was on its way, but that’s what the Bard had said. No one questioned the Bard. He listened to birds and observed the motions of the sea from his lonely perch near the old Roman house where he lived.

A rumbling sound made both Jack and Thorgil look up. The blacksmith’s two slaves had arrived with an oxcart. A moment later the large, silent men crashed through the underbrush to gather up the bracken. They tramped to and fro, never speaking, never making eye contact. They had been sold by their father in Bebba’s Town because they were of limited intelligence, and Jack wondered what kind of thoughts they had. They never seemed to communicate with each other or anyone else.

Even animals thought. As the Bard had instructed Jack, animals had much lore to impart to those who paid attention to them. What kind of lore did Gog and Magog, as the slaves were called, have to impart? Nothing good, Jack decided, looking at their brooding, averted faces.

When the oxcart had been loaded, Jack and Thorgil set off for home. Most of the time they lived at the Bard’s house, but now, during the crisis of the impending storm, they had returned to the farm Jack’s parents owned. It had grown a great deal in the last three years.

Beside the fields, farmhouse, barn, and winter storage shed was a new dairy Jack’s father had built. This contained three sturdy black cows tended by Pega, whom Jack had freed from slavery. She also cared for the chickens, new lambs, and a donkey. But she was not allowed to touch the horses. The horses were Thorgil’s domain and jealously guarded, particularly from the tanner’s daughters.

At the edge of the property, where the land was too stony for crops, was a hovel constructed of peat. This was where the tanner’s widow and her two daughters crowded together with hardly more room than three peas in a pod. They had arrived to help Jack’s mother the year before and had never gone home.

“I wish this storm would arrive,” cried Thorgil, throwing a stone at a crow. The crow eluded it. “The air’s so heavy! It’s like breathing under mud.”

Jack looked up at the cloudless, blue sky. Except for the ominous stillness, it could have been any early summer day. “The Bard spoke to a swallow from the south. It told him that the currents in the air were disordered and all the migrating birds were confused. Why don’t you ever talk to birds, Thorgil?” The shield maiden had gained this ability when she’d accidentally tasted dragon blood.

“They never tell me anything,” she said.

Jack shrugged. It was like her to ignore the gifts she had and to demand what she could never achieve, a glorious career as a warrior. Her paralyzed hand had put an end to that. She also wanted to be a poet. Jack had to admit that she wasn’t bad. Her voice was harsh and she had a fondness for bloody death scenes, but her stories held your attention.

During long winter evenings the villagers gathered at the chief’s hearth for song and hot cider. The Bard played his harp, and when he wearied, Jack and Thorgil recited sagas. Brother Aiden, the little monk from the Holy Isle, joined in with tales of the god Jesus, of how He fed a thousand people with five fishes and performed many other diverting miracles. But the real draw at these gatherings was Pega. Her voice was so compelling that the very storm blasts hushed to listen to her.

“By Thor, those Tanner brats are meddling with my horses!” Thorgil broke into a run, and Jack hurried after to break up the inevitable fight. The tanner’s daughters were fascinated by the horses, a gift from King Brutus the year before. Actually, it was unclear whose horses they were, since they’d been handed to the entire group of pilgrims returning from Bebba’s Town. Jack thought they ought to be the Bard’s, but Thorgil insisted that they were hers by right, since she was the only true warrior among them.

“Get off, you mangy curs! You’ll ruin their training!” Thorgil whistled and the horses wheeled, throwing their small riders into the dirt. The animals came to a halt before the shield maiden, prancing nervously like the spirited creatures they were. Jack ran to pick up the howling girls. “Tell them to shut up or I’ll really give them something to blubber about,” snarled Thorgil, stroking the manes of the horses.

Jack checked the girls and found they had no real injuries. They were eight and ten, stunted from years of bad food and the noxious air of the old tannery where they had lived until their father died. “They’re only children,” Jack reproved, wiping the girls’ dirty, tear-streaked faces with the tail of his tunic. “You probably did the same thing at that age.”

“I was a shield maiden. I was the daughter of—”

“Who was your da, then?” the older one demanded.

“Probably a troll,” the younger said, giggling. Thorgil reached down, but they sped off before she could wallop them with a rock.

“That debt is the only thing that keeps me from flinging my true heritage into their faces.” Thorgil embraced the neck of one of the horses, and it blew a long, horsey kiss at her. Jack was impressed, as always, by how much the animals loved her. Too bad she couldn’t inspire the same sentiment in people.

“Let’s go to the house,” Jack said. “I’m starving, and we have to cut bracken all afternoon.”

“Curse the bracken,” swore Thorgil. “Curse the pointless, boring existence in this village. For one rotten turnip I’d throw myself off a cliff into the sea!”

“No, you wouldn’t,” said Jack, leading the way.

The Islands of the Blessed (Sea of Trolls, Book 3) Hardcover

The Islands of the Blessed (Hardback or Cased Book)