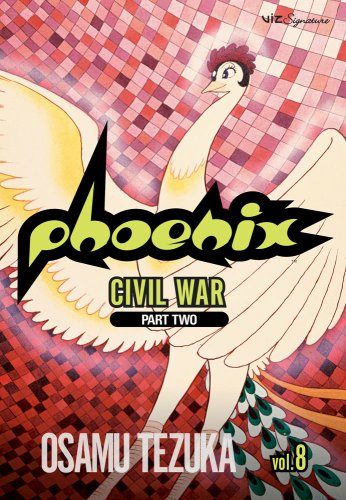 Considered by many the peak of Osamu Tezuka's artistic achievement and called his "life work" by the author, PHOENIX is made up 12 complex stories linked by the presence of the mythical bird, an immortal guarden of the universal life force. Read in order, the separate stories jump across time, alternating between a distant future and a distant past, converging on the present, with characters from one story being reincarnated in another. The 12 stories over 3000 pages.

Regarded by many as the "God of Manga" Osamu Tezuka was born in 1928 in Toyonoka, in Osaka, Japan. A prolific author and artist, Tezuka is generally regarded as the single figure responsible for developing Japan's massive manga and anime industries. His cinematic art style and novelistic narratives have made his work as universally accessible and relevant now as when first published in Japan. A list of his well-known and universally loved work includes the classic JUNGLE EMPEROR LEO (also known as Kimba the White Lion), BLACK JACK, ADOLF, MIGHTY ATOM (known as ASTRO BOY in the U.S.) and METROPOLIS (recently made into a hit anime film). Tezuka continued creating comics until his death in 1989.