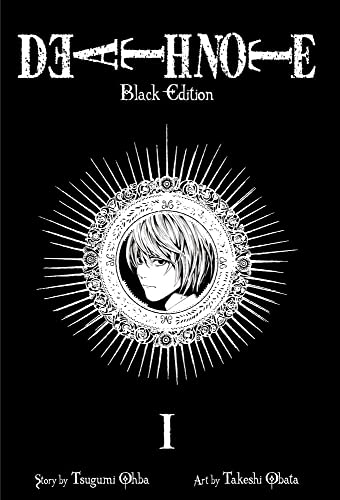 Killer 2-for-1 value on the hit thriller Death Note!

Light Yagami is an ace student with great prospects--and he’s bored out of his mind. But all that changes when he finds the Death Note, a notebook dropped by a rogue Shinigami death god. Any human whose name is written in the notebook dies, and now Light has vowed to use the power of the Death Note to rid the world of evil. Will Light's noble goal succeed, or will the Death Note turn him into the very thing he fights against?

Born in Tokyo, Tsugumi Ohba is the author of the hit series Death Note. His current series Bakuman., is serialized in Weekly Shonen Jump.

Takeshi Obata was born in 1969 Nigata, Japan, and is the artist of the widly popular SHONEN JUMP title Hikaru no Go, which won the 2003 Tezuka Osamu Cultural Prize: Shinsei "New Hope" and the 2000 Shogakukan Manga award. Obata is also the artist of Arabian Majin Bokentan Lamp Lamp, Ayasturi Sakon, Cyborg Jichan G., and the smash hit manga Death Note. His current series  Bakuman is serialized in the Weekly Shonen Jump.