Items related to The Legend of Zelda: Twilight Princess, Vol. 3 (3) 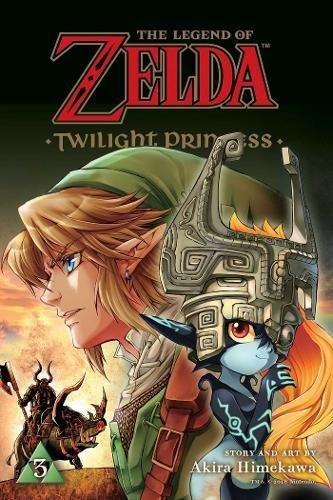 Link must defeat evil at every turn in his perilous quest to help Princess Zelda!

Link and Midna journey toward Death Mountain, seeking a power that can save Hyrule from the Shadow King. In the face of so many obstacles, Link must steel himself to overcome his own doubts and to find Ilia and the other villagers kidnapped by the forces of evil. But even if Link can defeat these challenges, he still has to find the shards of the Shadow Crystal. The quest continues in the Shadow Realm...

Akira Himekawa is the collaboration of two women, A. Honda and S. Nagano. Together they have created ten manga adventures featuring Link and the popular video game world of The Legend of Zelda, including Ocarina of Time, Oracle of Seasons and Four Swords. Their most recent work, The Legend of Zelda: Twilight Princess, is serialized digitally on the Manga One app in Japan.

Book Description Paperback. Condition: New. Translation. Language: English. Brand new Book. Link must defeat evil at every turn in his perilous quest to help Princess Zelda! Once upon a time, wizards tried to conquer the Sacred Realm of Hyrule. The Spirits of Light sealed the wizards' power within the Shadow Crystal and banished them to the Twilight Realm beyond the Mirror of Twilight. Now, an evil menace is trying to find Midna, Princess of the Twilight Realm, and the fragments of the Shadow Crystal to gain the power to rule over both the Twilight Realm and the World of Light. A long-awaited manga adaptation of The Legend of Zelda's most famous game. Penned by the bestselling team behind the Legend of Zelda manga. Seller Inventory # AAZ9781421598260