Items related to Primal Leadership (Unleashing the Power of Emotinal... 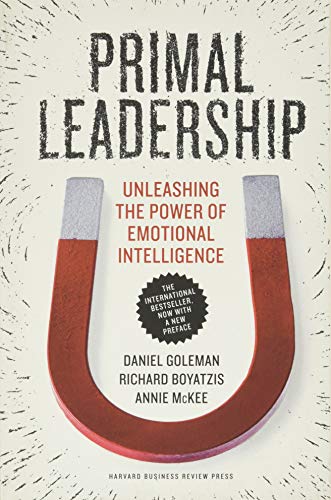 This is the book that established emotional intelligence” in the business lexicon and made it a necessary skill for leaders.

Managers and professionals across the globe have embraced Primal Leadership, affirming the importance of emotionally intelligent leadership. Its influence has also reached well beyond the business world: the book and its ideas are now used routinely in universities, business and medical schools, and professional training programs, and by a growing legion of professional coaches.

This refreshed edition, with a new preface by the authors, vividly illustrates the power and the necessity of leadership that is self-aware, empathic, motivating, and collaborative in a world that is ever more economically volatile and technologically complex. It is even timelier now than when it was originally published.

From bestselling authors Daniel Goleman, Richard Boyatzis, and Annie McKee, this groundbreaking book remains a must-read for anyone who leads or aspires to lead.

Also available in ebook format wherever ebooks are sold.

Business leaders who maintain that emotions are best kept out of the work environment do so at their organization's peril. Bestselling author Daniel Goleman's theories on emotional intelligence (EI) have radically altered common understanding of what "being smart" entails, and in Primal Leadership, he and his coauthors present the case for cultivating emotionally intelligent leaders. Since the actions of the leader apparently account for up to 70 percent of employees' perception of the climate of their organization, Goleman and his team emphasize the importance of developing what they term "resonant leadership." Focusing on the four domains of emotional intelligence--self-awareness, self-management, social awareness, and relationship management--they explore what contributes to and detracts from resonant leadership, and how the development of these four EI competencies spawns different leadership styles. The best leaders maintain a style repertoire, switching easily between "visionary," "coaching," "affiliative," and "democratic," and making rare use of less effective "pace-setting" and "commanding" styles. The authors' discussion of these methods is informed by research on the workplace climates engendered by the leadership styles of more than 3,870 executives. Indeed, the experiences of leaders in a wide range of work environments lend real-life examples to much of the advice Goleman et al. offer, from developing the motivation to change and creating an improvement plan based on learning rather than performance outcomes, to experimenting with new behaviors and nurturing supportive relationships that encourage change and growth. The book's final section takes the personal process of developing resonant leadership and applies it to the entire organizational culture. --S. Ketchum

We started to write a book about leadership, resonance and emotional intelligence. We ended up living it for the past two years with each other. The three of us have been studying emotional intelligence competencies and consulting with executives for decades on how to excel as leaders. As the ideas and experiences were brought together, we found an excitement that was contagious. It was fun. And it was contagious to others around us.

That is the point of the book. Great leaders move us by creating a resonance with others. Mayor Guiliani did not win widespread acclaim because he broadcast the financial impact of the September 11th disaster. He spoke to our hearts and our need to believe in each other and he struck a resonant chord in many all over the world. Each person's emotional intelligence feeds this resonance like banging on a drum louder and louder and setting off vibrations in other drums nearby. In the book we trace the neural circuitry that drives the actions known as emotional intelligence and their link to outstanding performance in many types of organizations.

Just as you begin to wonder if this is genetically determined, we offer evidence on years of longitudinal studies showing that people can develop these competencies. The process of improving one's emotional intelligence is described with stories of people who have done it- people who have sustained the improvements for seven years following beginning the process. Leaders can use these steps and their own emotional intelligence to create this resonance in teams and organizational cultures. The effect is that others get excited and do things they had not thought possible previously.

We hope you can join us in this excitement. We hope that the ideas and examples in the book create a resonance in you, the reader. Then you can lead others in discovering how people can use their collective talent to build effective and meaningful teams, organizations, and families.

4. Primal Leadership, With a New Preface by the Authors: Unleashing the Power of Emotional Intelligence

5. Primal Leadership, With a New Preface by the Authors: Unleashing the Power of Emotional Intelligence

6. Primal Leadership, With a New Preface by the Authors: Unleashing the Power of Emotional Intelligence

7. Primal Leadership, With a New Preface by the Authors: Unleashing the Power of Emotional Intelligence

8. Primal Leadership, With a New Preface by the Authors: Unleashing the Power of Emotional Intelligence

Book Description Harvard Business Review Press, 2013. Paperback. Condition: New. Paperback. This is the book that established emotional intelligence in the business lexicon and made it a necessary skill for leaders.Managers and professionals across the globe have embraced Primal .Shipping may be from multiple locations in the US or from the UK, depending on stock availability. 306 pages. 0.341. Seller Inventory # 9781422168035