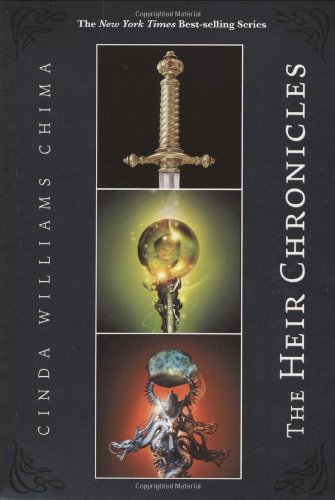 Three boys, three talismans, one destiny.  In this page-turning trilogy, Cinda Williams Chima explores what it means to be different, what’s worth fighting for, and what’s worth dying for...
THE WARRIOR HEIR

Jack lives an unremarkable life in Trinity, Ohio. Only his daily medicine and the thick scar above his heart set him apart from other teenagers at his high school.  Until one day, Jack skips his medicine and finds himself stronger, fiercer, and more confident than ever before.  He feels incredible until he nearly kills another player on the soccer field.

Soon, Jack learns the startling truth: he is Weirlind, part of a magical underground society of wizards, warriors, and enchantors.  Weir’s mighty, feuding houses of the Red Rose and the White Rose determine power through The Game, a modern-day gladiator battle in which warriors from each house fight to the death.  The winning house rules the Weir.  But Jack finds out that he’s not just another member of Weirlind he’s one of the last warriors and both houses are scouting for a player.


Sixteen-year-old Seph McCauley has spent the past three years getting kicked out of one exclusive private school after another. Unfortunately it’s not his attitude that’s the problem.  It’s the trail of magical accidents lately, disasters that follow in his wake.  Seph is a wizard, orphaned and untrained--and now that the only person who could protect him has died, his powers are escalating out of control.

At the Havens, a secluded boys’ school in Maine, Seph meets headmaster Gregory Leicester, who promises to initiate him into his order of wizards.  But Seph soon learns that training comes at a steep cost, and that Leicester plans to use his students' powers to serve his own malicious agenda.  This wizard war is one that Seph may not have the strength to survive.

THE DRAGON HEIR
The covenant that was meant to keep the wizard wars at bay has been stolen, and Trinity must prepare for attack.  Jason Haley finds himself excluded from the action until he finds the Dragonheart.  The opal stone seems to sing to his very soul, but Trinity's guardians seize it after they realize its powers.  Madison Moss feels the beating heart of the opal, too.  The desire for it surges through her, but Maddie also has a secret.  Ever since absorbing the magical blow that was meant to kill Seph, she's been leaking dark powers.  Trinity's enemies believe they can use her to get to the Dragonheart and they'll use anyone she cares about to make her steal the stone for them.

Moral compasses spin out of control as a final battle storms through what was once a sanctuary for the gifted.  With so much to lose, what will Jason and Maddie be willing to fight for -- and what will they sacrifice?

Cinda Williams Chima is theNew York Timesbestselling author ofThe Warrior Heir; The Wizard HeirandTheDragon Heir.Cinda is a graduate of the University of Akron and Case Western Reserve University. She lives in Ohio with her husband. Visit her on the web at www.cindachima.com.