Items related to I'm a Frog! (An Elephant and Piggie Book) (Elephant... 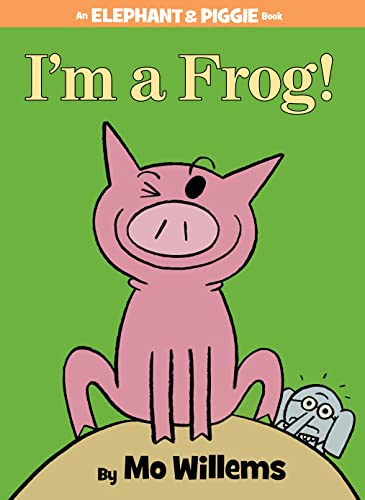 Gerald is careful. Piggie is not.
Piggie cannot help smiling. Gerald can.
Gerald worries so that Piggie does not have to.

Gerald and Piggie are best friends.

In I'm a Frog! Piggie has some ribbiting news! Can Gerald make the leap required to accept Piggie's new identity?

Mo Willems (www.pigeonpresents.com), a number one New York Times best-selling author and illustrator, has been awarded a Caldecott Honor on three occasions (for Don't Let the Pigeon Drive the Bus!, Knuffle Bunny: A Cautionary Tale, and Knuffle Bunny Too: A Case of Mistaken Identity). Don't Let the Pigeon Drive the Bus! was also an inaugural inductee into the Indies Choice Picture Book Hall of Fame. And his celebrated Elephant & Piggie early reader series has been awarded the Theodor Seuss Geisel Medal on two occasions (for There Is a Bird on Your Head! and Are You Ready to Play Outside?) as well as three Honors (for We Are in a Book!, I Broke My Trunk!, and Let's Go for a Drive!). Other favorites include Naked Mole Rat Gets Dressed and City Dog, Country Frog, illustrated by Jon J Muth.

Gerald the elephant is stunned when Piggie announces he is a frog. "You look like a pig. And your name is Piggie." So Piggie explains the concept of pretending, which Gerald doesn't get at all. When Piggie tells Gerald he can pretend, he contends he can't. This is even slighter than most of the series' previous books, but it does have a funny surprise ending, and kids get to consider just what it means to pretend. The familiar pictures get their action from Piggie hopping around and their humor from the droll expression on the elephant's face. New readers will like this because the same word is repeated over and over: ribbit. - Ilene Cooper Booklist"

PreS-Gr 1 Elephant and Piggie continue to amuse in this early reader. Piggie pretends to be a ribbiting, jumping frog, and children will catch on quickly and delight in "explaining" to Elephant that his friend is not actually a frog. The story is especially entertaining when Piggie tries to convince Elephant that he, too, can play their banter escalates to a spread of tangled "No, I can't!/Yes, you can!" speech bubbles. True to Willems's style, a white background, minimal color, and charcoal outlines draw focus to the always-changing facial expressions of Elephant and Piggie. With heavy black dashes to signify motion, Piggie practically jumps off the page. The story ends with a playful twist, in which Elephant finally comprehends and pretends to be a cow. I'm a Frog will join the ranks of other well-loved Elephant and Piggie books. Nora Clancy, Teachers College Community School, New York City SLJ"

Piggie teaches her pachyderm pal to pretend. Considering that this is their 20th outing, Elephant seems a little slow on the uptake, but he sees the light eventually. Hopping around her bewildered buddy with many a "Ribbet!" Piggie explains, "I was a pig. Now I am a frog." Gerald the elephant panics, thinking that he too might be transformed at any moment; there's all that hopping, and as for eating flies-! Piggie goes on to explain just what "pretending" is all about. Stunned-"And you can just do that?!" -and assured that even grown-ups pretend, Elephant resists Piggie's invitation to join her in the game. A characteristically hilarious spread depicts the two in heated debate, Piggie's seven pink speech balloons ("Yes you can!") tangling with Elephant's eight gray ones ("No, I can't!"). But he's got the last laugh, going on to let out a mighty "MOOOOOOOOOOOO!" Cue the animal concert. As ever, Willems gives figures drawn with elemental simplicity and broadly expressed reactions just a few, but often very large, dialogue words to tell the tale. Children aren't likely to need the instruction, but the validation may be helpful to counter imagination-repressing parents or older sibs. (Early reader. 4-8) Kirkus"

I'm a Frog! (an Elephant and Piggie Book) (Hardback)

I'm a Frog! (An Elephant and Piggie Book) Hardcover

I'm a Frog! (an Elephant and Piggie Book) (Hardback or Cased Book)

I'm a Frog! (An Elephant and Piggie Book) Format: Hardcover