Items related to Descent into Chaos: The United States and the Failure...

Rashid, Ahmed Descent into Chaos: The United States and the Failure of Nation Building in Pakistan, Afghanistan, and Central Asia

Descent into Chaos: The United States and the Failure of Nation Building in Pakistan, Afghanistan, and Central Asia 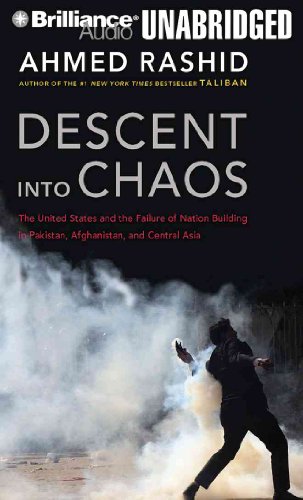 Ahmed Rashid is the voice of reason amid the chaos of Central Asia today. His unique knowledge of this complex, war-torn region gives him a panoramic vision and grasp of nuance that no Western writer can emulate. In Descent Into Chaos, Rashid reviews the regional conditions since 9/11 and the catastrophic aftermath of America’s failed war on terror. The underlying theme is clear, devastating and deeply critical of current U.S. foreign policy. Iraq is essentially a sideshow. Pakistan and Afghanistan are where the war really began. Pakistan remains the crucial resource and key player, and Afghanistan is where the fight against Islamic insurgency is eventually going to be played out. Rashid also brings into clear focus the regional issues of Central Asia that few in our country seem to understand and yet are having a crucial impact on our own security and conduct. Seven years after 9/11, despite the thousands of lives and billions of dollars that have been spent in the region, it is in chaos. Pakistan, unstable and armed with nuclear weapons, has become terrorism central. The Taliban is resurging and reconquering land, and al Qaeda is stronger than ever. And at the heart of these calamities is the United States’ refusal to accept its responsibility for statecraft and nation building and its utter failure to understand the region. Rashid’s blistering critique of American policy is also a warning and an impassioned call to correct our failed strategies. There is no more urgent global task.

About the Author:
Ahmed Rashid is a Pakistani journalist based in Lahore who writes for The Washington Post, Daily Telegraph (London), the International Herald Tribune, The New York Review of Books, BBC Online, and The Nation. His previous books include Jihad, Taliban, and The Resurgence of Central Asia. He appears regularly on NPR, CNN, and the BBC World Service.
From AudioFile:
Arthur Morey's narration is succinct, measured, and sharp despite the tone of this scathing overview of U.S. foreign policy errors in the Middle East. The text, which spans world events from just before 9/11 to the present day, is an indictment of neoconservative mismanagement of American diplomacy. Yet Morey's rapid delivery of complex sentences and ideas maintains a journalist's distance from the litany of incredible historical facts. This balanced tone prevents the volume from descending into an emotional diatribe. Morey's voice allows the listener to absorb the staggering scope of information presented, which includes a discussion of the dismantling of Iraq and new forms of colonialism that are suggested in the war in Afghanistan. M.R. 2009 Audies Finalist © AudioFile 2009, Portland, Maine

Descent Into Chaos: The United States and the Failure of Nation Building in Pakistan, Afghanistan, and Central Asia [Audio CD] Rashid, Ahmed and Morey, Arthur