Items related to Western Civilization: Beyond Boundaries, Volume 2 Since...

Western Civilization: Beyond Boundaries, Volume 2 Since 1560 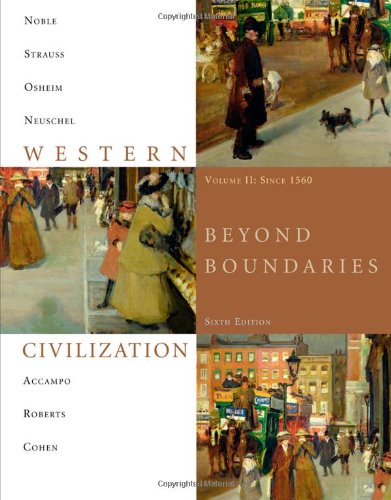 WESTERN CIVILIZATION, Sixth Edition, is distinguished for its wider definition of Europe that includes Eastern Europe, Scandinavia, and European frontiers. Recognizing that factors outside the continent affected European history, the authors highlight Europe's place in the world throughout the narrative and in the primary source feature, "The Global Record". Carefully revised and edited for greater accessibility, the Sixth Edition is briefer and incorporates pedagogical features such as focus questions, key terms, and section summaries to better support students of western civilization. The reconceived narrative and streamlined organization, featuring smaller, more cohesive learning units, lend to greater ease of use for both students and instructors. Available in the following split options: WESTERN CIVILIZATION Complete (Chapters 1-30), ISBN: 1424067820; Volume I: To 1715 (Chapters 1-17), ISBN: 1424069610; Volume II: Since 1560 (Chapters 15-30), ISBN: 1424069629; Volume A: To 1500 (Chapters 1-12), ISBN: 1424069580; Volume B: 1300-1815 (Chapters 11-19), ISBN: 1424069599; Volume C: Since 1789 (Chapters 19-30), ISBN: 1424069602.

After receiving his Ph.D. from Michigan State University, Thomas Noble taught at Albion College, Michigan State University, Texas Tech University, and the University of Virginia. In 1999 he received the University of Virginia's highest award for teaching excellence and in 2008 Notre Dame's Edmund P. Joyce, C.S.C., Award for Excellence in Undergraduate Teaching. In 2011 he received the Charles Sheedy, C.S.C., award for excellence in teaching and scholarship from Notre Dame's College of Arts and Letters. In 2001 he became Robert M. Conway Director of the Medieval Institute at the University of Notre Dame and in 2008 chairperson of Notre Dame's history department. He is the author of Images, Iconoclasm, and the Carolingians, which won the 2011 Otto Gründler Prize, and The Republic of St. Peter: The Birth of the Papal State, 680-825. He has edited six books. He was a member of the Institute for Advanced Study in 1994 and the Netherlands Institute for Advanced Study in 1999-2000. He has been awarded fellowships by the National Endowment for the Humanities (three times) and the American Philosophical Society (twice). He was elected a Fellow of the Medieval Academy of America in 2004. In 2012 he served as president of the American Catholic Historical Association.

Professor of history and classics at Cornell University, Barry Strauss holds a Ph.D. from Yale. He has been awarded fellowships by the National Endowment for the Humanities, the American Academy in Rome, the American School of Classical Studies at Athens, The MacDowell Colony for the Arts, the Korea Foundation, and the Killam Foundation of Canada. He is the recipient of the Clark Award for excellence in teaching from Cornell. He is Chair of Cornell's Department of History, Director of Cornell's Program on Freedom and Free Societies, and Past Director of Cornell's Peace Studies Program. His many publications include Athens After the Peloponnesian War: Class, Faction, and Policy, 403-386 B.C.; Fathers and Sons in Athens: Ideology and Society in the Era of the Peloponnesian War; The Anatomy of Error: Ancient Military Disasters and Their Lessons for Modern Strategists (with Josiah Ober); Hegemonic Rivalry from Thucydides to the Nuclear Age (coedited with R. New Lebow); War and Democracy: A Comparative Study of the Korean War and the Peloponnesian War (coedited with David R. McCann); Rowing Against the Current: On Learning to Scull at Forty; The Battle of Salamis, the Naval Encounter That Saved Greece-and Western Civilization; The Trojan War: A New History; The Spartacus War; and Masters of Command: Alexander, Hannibal, Caesar and the Genius of War. His books have been translated into seven languages. His book The Battle of Salamis was named one of the best books of 2004 by the Washington Post.

A Fellow of the American Academy in Rome with a Ph.D. in History from the University of California at Davis, Duane Osheim is professor of history at the University of Virginia. He has held fellowships from the American Council of Learned Societies, the American Philosophical Society, the National Endowment for the Humanities, and the Fulbright Program. He is author and editor of A Tuscan Monastery and Its Social World; An Italian Lordship: The Bishopric of Lucca in the Late Middle Ages; Beyond Florence: The Contours of Medieval and Early Modern Italy; and Chronicling History: Chroniclers and Historians in Medieval and Renaissance Italy.

After receiving her Ph.D. from Brown University, Kristen Neuschel taught at Denison University and Duke University, where she is currently associate professor of history and Director of the Thompson Writing Program. She is a specialist in early modern French history and is the author of Word of Honor: Interpreting Noble Culture in Sixteenth-Century France and articles on French social history and European women's history. She has received grants from the Josiah Charles Trent Memorial Foundation, the National Endowment for the Humanities, and the American Council of Learned Societies. She has also received the Alumni Distinguished Undergraduate Teaching Award, which is awarded annually on the basis of student nominations for excellence in teaching at Duke.

Professor of history and gender studies at the University of Southern California, Elinor Accampo completed her Ph.D. at the University of California, Berkeley. Prior to her career at USC, she taught at Colorado College and Denison University. She specializes in modern France and is the author of Blessed Motherhood; Bitter Fruit: Nelly Roussel and the Politics of Female Pain in Third Republic France; and Industrialization, Family, and Class Relations: Saint Chamond, 1815-1914. She has coedited (with Christopher Forth) Confronting Modernity in Fin-de-Siècle France and (with Rachel Fuchs and Mary Lynn Stewart) Gender and the Politics of Social Reform in France. She has received fellowships and travel grants from the German Marshall Fund, the Haynes Foundation, the American Council of Learned Societies, and the National Endowment for the Humanities, as well as an award for Innovative Undergraduate Teaching at USC.

1. Western Civilization: Beyond Boundaries, Volume 2 Since 1560

3. Western Civilization: Beyond Boundaries, Volume 2 Since 1560

8. Western Civilization: Beyond Boundaries, Volume 2 Since 1560