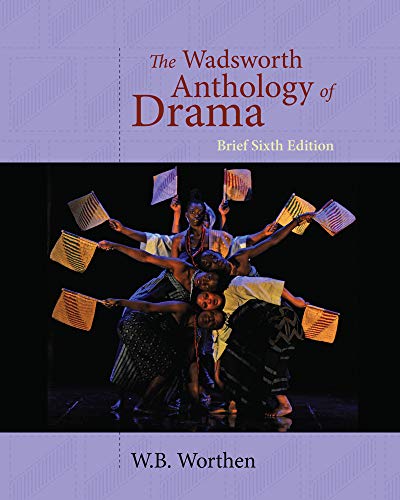 The boldest and most distinguished introduction to drama available today, W.B. Worthen's pace-setting text continues to provide exciting plays usefully situated within their historical and cultural contexts. Based on the best-selling WADSWORTH ANTHOLOGY OF DRAMA, the Brief Edition provides many of the important elements of that anthology but in a more streamlined form.

W. B. Worthen, Alice Brady Pels Professor in the Arts, is Professor and Chair of the Department of Theater at Barnard College, Columbia University. He is the author of Shakespeare and the Force of Modern Performance (Cambridge University Press, 2003) Shakespeare and the Authority of Performance (Cambridge University Press, 1997), Modern Drama and the Rhetoric of Theater (University of California Press, 1992), The Idea of the Actor: Drama and the Ethics of Performance (Princeton University Press, 1984), Modern Drama: Plays, Criticism, Theory (Wadsworth, 1995), and of many articles on modern drama, Shakespeare, and theories of performance. Professor Worthen received his B. A. in English from the University of Massachusetts at Amherst and his Ph.D. in English from Princeton University, and has held research fellowships form the Guggenheim Foundation and the National Endowment of the Humanities. He is past editor of Theatre Journal and current coeditor of Modern Drama.

"I think the historical introductions are unparalleled."

"The Wadworth Anthology is a superior drama anthology, offering its users an extensive range of plays, critical essays, and historical information for the study of theatre history and dramatic literature."

"W. B. Worthen's selection of plays, choice of criticism and insightful and economical commentary make the Wadsworth Anthology the standout text in its field."

1. The Wadsworth Anthology of Drama

4. The Wadsworth Anthology of Drama

Shipping: US$ 20.90
From United Kingdom to U.S.A.
Destination, rates & speeds