Items related to Alice's Adventures in Wonderland & Other Stories... 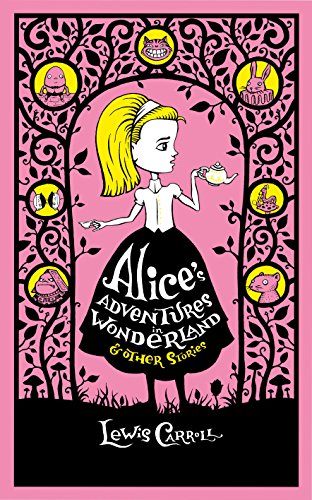 Everything that Lewis Carroll ever published in book form appears in this volume. In addition, at least ten of the shorter pieces have never appeared in print except in their original editions. Included are: "Alice's Adventures in Wonderland", "Through the Looking-Glass", "Sylvie and Bruno", "Sylvie and Bruno Concluded", "The Hunting of the Snark" and all of the poetry, essays and phantasmagoria along with a substantial collection of his miscellaneous writings. "Alice's Adventures in Wonderland & Other Stories" is part of "Barnes & Noble"'s series of quality leatherbound volumes. Each title in the series presents a classic work in an attractively designed edition bound in genuine bonded leather, with beautiful illustrations and breathtaking endpapers. These books make elegant additions to any home library.

Charles Lutwidge Dodgson, known by his pen name, Lewis Carroll, was happiest in the company of children for whom he created puzzles, clever games and charming letters. As all Carroll admirers know, his book Alice's Adventures in Wonderland (1865) became an immediate success and has since been translated into more than eighty languages. The equally popular sequel Through the Looking-Glass and What Alice Found There, was published in 1872. The Alice books are but one example of his wide ranging authorship. The Hunting of the Snark, a classic nonsense epic (1876) and Euclid and His Modern Rivals, a rare example of humorous work concerning mathematics, still entice and intrigue today's students. His humour, sparkling wit and genius have lasted for more than a century and his books are among the most quoted works in the English language.

4. Alice's Adventures in Wonderland & Other Stories

Book Description Condition: new. John Tenniel (illustrator). writings. Includes illustrations by John Tenniel. Includes such stories as - "Alice's Adventures in Wonderland", "Through the Looking-Glass", "Sylvie and Bruno", "Sylvie and Bruno Concluded", "The Hunting of the Snark" and the poetry, essays and phantasmagoria along with a collection of the author's miscellaneous writings. Shipping may be from multiple locations in the US or from the UK, depending on stock availability. Seller Inventory # 9781435122949