Items related to Red Ink: Native Americans Picking Up the Pen in the... 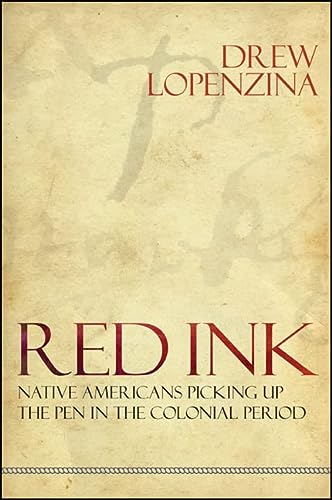 The Native peoples of colonial New England were surprisingly quick to grasp the practical functions of Western literacy. Their written literary output was composed to suit their own needs and expressed views often in resistance to the agendas of the European colonists with whom they were confronted. Red Ink is an engaging retelling of American colonial history, one that draws on documents that have recieved scant critical attention to offer an important new interpretation grounded in indigenous contexts and perspectives. Author Drew Lopenzina reexamines a literature that has been compulsively "corrected" and overinscribed with the norms and expectations of the dominant culture, while simultaneously invoking the often violent tensions of "contact" and the processes of unwitnessing by which Native histories and accomplishments were effectively erased from the colonial record. In a compelling narrative arc, Lopenzina enables readers to travel through a history that, however seemingly familiar, has never been fully appreciated or understood from a Native-centered perspective.

About the Author:
Drew Lopenzina is a Professor of Early American and Native American literature at Old Dominion University in Norfolk, VA.