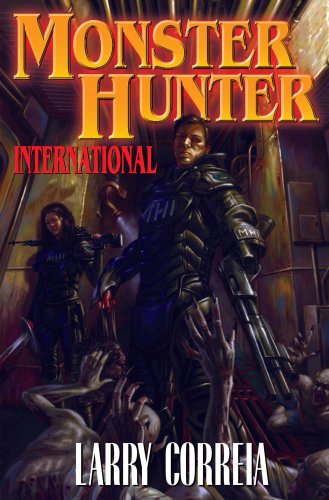 Five days after Owen Zastava Pitt pushed his insufferable boss out of a fourteenth story window, he woke up in the hospital with a scarred face, an unbelievable memory, and a job offer.

It turns out that monsters are real. All the things from myth, legend, and B-movies are out there, waiting in the shadows. Officially secret, some of them are evil, and some are just hungry. On the other side are the people who kill monsters for a living. Monster Hunter International is the premier eradication company in the business. And now Owen is their newest recruit.

It’s actually a pretty sweet gig, except for one little problem. An ancient entity known as the Cursed One has returned to settle a centuries old vendetta. Should the Cursed One succeed, it means the end of the world, and MHI is the only thing standing in his way. With the clock ticking towards Armageddon, Owen finds himself trapped between legions of undead minions, belligerent federal agents, a cryptic ghost who has taken up residence inside his head, and the cursed family of the woman he loves.

Larry Correia is hopelessly addicted to two things: guns and B-horror movies. He lists his occupations: gun dealer, firearms instructor, accountant, and writer, and is part owner of FBMG (Fuzzy Bunny Movie Guns) a company specializing in firearms and movie props. He shoots competitively and is a certified concealed weapons instructor. Larry resides in Utah with his very patient wife and family. He has also designed a special patch for the agents of Monster Hunter International, Inc. As he puts it, “If you don’t look good while you’re killing stuff, then you’re not really a monster hunter.”