Items related to The Kitchen House: A Novel 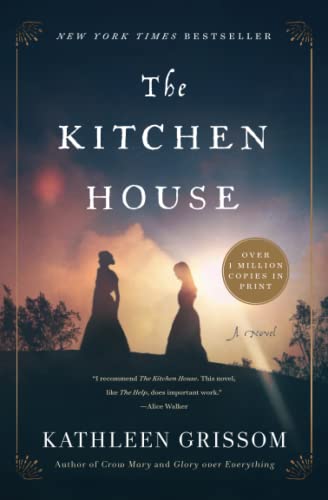 Kathleen Grissom, New York Times bestselling author of the highly anticipated Glory Over Everything, established herself as a remarkable new talent with The Kitchen House, now a contemporary classic. In this gripping novel, a dark secret threatens to expose the best and worst in everyone tied to the estate at a thriving plantation in Virginia in the decades before the Civil War.

Orphaned during her passage from Ireland, young, white Lavinia arrives on the steps of the kitchen house and is placed, as an indentured servant, under the care of Belle, the master’s illegitimate slave daughter. Lavinia learns to cook, clean, and serve food, while guided by the quiet strength and love of her new family.

In time, Lavinia is accepted into the world of the big house, caring for the master’s opium-addicted wife and befriending his dangerous yet protective son. She attempts to straddle the worlds of the kitchen and big house, but her skin color will forever set her apart from Belle and the other slaves.

Through the unique eyes of Lavinia and Belle, Grissom’s debut novel unfolds in a heartbreaking and ultimately hopeful story of class, race, dignity, deep-buried secrets, and familial bonds.

When a white servant girl violates the order of plantation society, she unleashes a tragedy that exposes the worst and best in the people she has come to call her family.

Orphaned while onboard ship from Ireland, seven-year-old Lavinia arrives on the steps of a tobacco plantation where she is to live and work with the slaves of the kitchen house. Under the care of Belle, the master's illegitimate daughter, Lavinia becomes deeply bonded to her adopted family, though she is set apart from them by her white skin.

Eventually, Lavinia is accepted into the world of the big house, where the master is absent and the mistress battles opium addiction. Lavinia finds herself perilously straddling two very different worlds. When she is forced to make a choice, loyalties are brought into question, dangerous truths are laid bare, and lives are put at risk.

The Kitchen House is a tragic story of page-turning suspense, exploring the meaning of family, where love and loyalty prevail.

Explore the reading group guide for The Kitchen House.

A Conversation with Author Kathleen Grissom

Q: What information surprised you while doing research on white indentured servants?

A: When I first began my research I was astonished to discover the great numbers of Irish that were brought over as indentured servants. Then, when I saw advertisements for runaway Irish indentured servants, I realized that some of them, too, must have suffered under intolerable conditions.

Q: Why did you chose not to go into detail about some of the most dramatic plot points in the novel, for example, the death of Waters or the abuse of young Marshall?

A: For the most part, Lavinia and Belle dictated the story to me. From the beginning, it became quite clear that if I tried to embellish or change their story, their narration would stop. When I withdrew, the story would continue. Their voices were quite distinct. Belle, who always felt grounded to me, certainly did not hold back with description, particularly of the rape. Lavinia, on the other hand, felt less stable, less able to cope; and at times it felt as though she was scarcely able to relate her horror.

Q: It is interesting that your novel has two narrators--Lavinia and Belle. Do you have any plans to continue the story into the next generation--perhaps from the perspectives of Jaime and Elly?

A: In 1830, Jamie is a well-respected ornithologist in Philadelphia and Sukey is enslaved by the Cherokee Indians in North Carolina. Theirs are the two voices I hear. In time I will know if I am meant to tell their story. Presently I am writing Crow Mary, another work of historical fiction. A few years ago I was visiting Fort Walsh in the Cypress Hills of Saskatchewan. As I listened to an interpreter tell of Mary, who, in 1872, at the age of sixteen, was traded in marriage to a well-known fur trader, a familiar deep chill went thorough me. I knew then that I would return to write about this Crow woman. Some of her complex life is documented, and what fascinates me are her acts of bravery, equal, in my estimation, to those of Mama Mae.

Q: This is your first novel after diverse careers in retail, agriculture, and the arts. How have each of these experiences contributed to your writing style?

A: I don't know that any endeavor specifically contributed to my writing style, but I do know that every phase of my life helped prepare me to write this book.

Q: The dialogue of the slaves in this novel is very believable. It must have been a difficult thing to achieve. How did you go about creating authentic voices from two hundred years ago?

A: At the very beginning of my research I read two books of slave narratives: Bullwhip Days: The Slaves Remember and Weevils in the Wheat: Interviews with Virginia Ex-Slaves. Soon after, the voices from The Kitchen House began to come to me. My original draft included such heavy dialect that it made the story very difficult to read. In time I modified the style so the story could be more easily read.

Q: You said you wrote the prologue in one sitting after being inspired by a map you found while renovating an old plantation tavern. Since this is your first novel, do you think you were "guided" by residents of the past?

A: Not only do I feel I was guided but also that I was gifted with their trust. However, I am not alone in this. In Alice Walker's book The Color Purple, she writes: "I thank everybody in this book for coming. A.W., author and medium." Unless I misread that, I'd say, in this experience, I'm in good company.

Q: Your book has been described as "Gone with the Wind turned upside down." Are you a fan of Margaret Mitchell's novel? Which writers have inspired you through the years?

A: I have only recently read Gone with the Wind. Although I did enjoy it, a few of the writers that have truly inspired me are Robert Morgan, Alice Randall, Susan Fromberg Schaeffer, Edward P. Jones, Nuala O'Faolain, Alexandra Fuller, Susan Howatch, Rick Bragg, Breena Clarke, Beryl Markham, Alice Walker, Joan Didion . . . this list could go on forever. I love to read.

Q: There are many characters in this novel. How did you go about choosing their names?

A: They were all taken from different lists of slaves that I found in my research.

Q: What advice do you have for writers working on their first novels?

A: If you feel called to write a book, consider it a gift. Look around you. What assistance is the universe offering you as support? I was given an amazing mentor, a poet, Eleanor Drewry Dolan, who taught me the importance of every word. To my utter amazement, there were times she found it necessary to consult three dictionaries to evaluate one word! Take the time you need to learn the craft. Then sit down and write. When you hand over your completed manuscript to a trusted reader, keep an open mind. Edit, edit, and edit again. And, of course, never give up! Q: At times in the novel, you can almost smell the hearty foods being prepared by Mama and others. In your research, did you find any specific notes or recipes from kitchen houses that you can share with your readers?

A: In 1737, William Byrd, founder of Richmond, wrote of the many types of fruits and vegetables available in Virginia. Watermelons, pumpkins, squashes, cucumbers, artichokes, asparagus, green beans, and cauliflower were all being cultivated. I discovered that many of these were preserved by pickling. For those interested in how this was done and for recipes from that time, an excellent resource is Martha Washington's Booke of Cookery and Booke of Sweetmeats, transcribed by Karen Hess.
While in Williamsburg, I watched re enactors roast beef over a spit in a kitchen fireplace. Small potatoes in a pan beneath the meat were browning in the drippings, and I cannot tell you how I longed for a taste. That was my inspiration for the Christmas meal. For basics, such as the chicken soup, I built a recipe around what I knew would have been available for use in the kitchen house at that time.
Whenever Belle baked a molasses cake, I craved a taste. I did try several old recipes that I found, but I was unsatisfied with the results. So, using the old recipes as a baseline, my daughter, Erin, and I created our own version of a simple yet moist and tasty molasses cake. I am happy to share it with the readers:

Preheat the oven to 350 degrees. Grease an 8-inchsquare baking pan. In a large bowl, cream the butter and sugar. Beat in the egg. In a separate bowl, combine the milk and the molasses. In another bowl, combine the flour, baking soda, ginger, cinnamon, cloves, and salt. Add each of these alternately to the butter mixture, beating well between additions. Spoon batter into the prepared pan. Bake for approximately 45 minutes, or until a toothpick comes out clean.

Born and raised in Saskatchewan, Kathleen Grissom is now happily rooted in south-side Virginia, where she and her husband live in the plantation tavern they renovated. She is the author of The Kitchen House and most recently Glory Over Everything.

The Kitchen House: A Novel Paperback