Items related to The First Bad Man: A Novel

The First Bad Man: A Novel 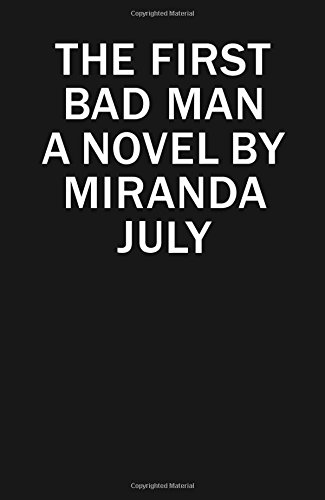 From the acclaimed filmmaker, artist, and bestselling author of No One Belongs Here More Than You, a spectacular debut novel that is so heartbreaking, so dirty, so tender, so funny—so Miranda July—that readers will be blown away.

Here is Cheryl, a tightly-wound, vulnerable woman who lives alone, with a perpetual lump in her throat. She is haunted by a baby boy she met when she was six, who sometimes recurs as other people’s babies. Cheryl is also obsessed with Phillip, a philandering board member at the women’s self-defense nonprofit where she works. She believes they’ve been making love for many lifetimes, though they have yet to consummate in this one.

When Cheryl’s bosses ask if their twenty-one-year-old daughter, Clee, can move into her house for a little while, Cheryl’s eccentrically ordered world explodes. And yet it is Clee—the selfish, cruel blond bombshell—who bullies Cheryl into reality and, unexpectedly, provides her the love of a lifetime.

Tender, gripping, slyly hilarious, infused with raging sexual obsession and fierce maternal love, Miranda July’s first novel confirms her as a spectacularly original, iconic, and important voice today, and a writer for all time. The First Bad Man is dazzling, disorienting, and unforgettable.

An Amazon Best Book of the Month, January 2015: Cheryl Glickman is an employee at a self-defense nonprofit, an ironic profession once you get to know her. She lives alone, pickling in her eccentricities, and obsesses over a douchey co-worker with designs on much younger prey. If anyone needs the sense knocked into her, it is Cheryl, and lo and behold, an unwelcome and most unsanitary houseguest just might (literally) be up to the task. As Cheryl is taken outside of her comfort zone, you may be as well when reading Miranda July’s hilariously irreverent and oddly romantic novel, The First Bad Man. There are some outlandishly crude moments that belie what ends up being an achingly tender treatise on love and motherhood. It is a testament to July’s skill as a storyteller that she is able to make you laugh, cringe, and cry from one page to the next, and not only sympathize with a very unlikely heroine, but actually relate to her. Let your freak flags fly and enjoy. –Erin Kodicek

Miranda July is a filmmaker, artist, and writer. Her most recent book is The First Bad Man, a novel. July’s collection of stories, No One Belongs Here More Than You, won the Frank O’Connor International Short Story Award and has been published in twenty-three countries. Her writing has appeared in The Paris Review, Harper’s, and The New Yorker; It Chooses You was her first book of nonfiction. She wrote, directed and starred in The Future and Me and You and Everyone We Know—winner of the Camera d’Or at the Cannes Film Festival and a Special Jury Prize at Sundance. July’s participatory art works include the website Learning to Love You More (with artist Harrell Fletcher), Eleven Heavy Things (a sculpture garden created for the Venice Biennale), New Society (a performance), and Somebody (a messaging app created with Miu Miu.) She is currently working on a new feature film. Raised in Berkeley, California, July lives in Los Angeles.