Items related to The Chronicles of the 28th Infantry Division: Peacekeeping...

Zapotoczny Jr., Walter S. The Chronicles of the 28th Infantry Division: Peacekeeping through the Global War on Terrorism, 1996-2008

The Chronicles of the 28th Infantry Division: Peacekeeping through the Global War on Terrorism, 1996-2008 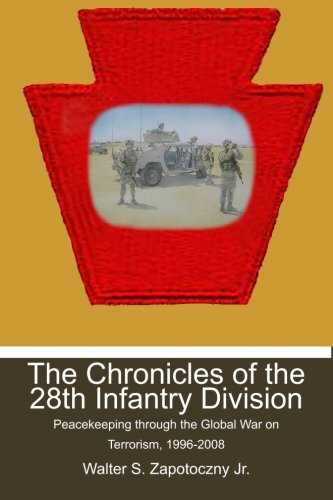 It became a familiar routine for the soldiers of the nation’s oldest division – the 28th Infantry Division. First, the phone call would come alerting the unit of a possible mobilization. Next, the soldiers would assemble at the home armories with families and friends to say their goodbyes and wish them well. They would board buses for places like Fort Dix, New Jersey or Fort Stewart, Georgia to begin the training they would need when they deployed. After being validated by their active duty counterparts and final medical checks, the next event was a grueling flight to a foreign land where the men and women of the division would assume their new duties. In some cases they looked for weapons caches, others escorted convoys or guarded detainees. Many found themselves fighting the enemies of their newly adopted country along side of that country’s army and police. In every case, the men and women of the division made significant contributions to the welfare of the citizens and to the governments they deployed to help. When their time came, they came back home to their families confident that they had made a difference. The successes of the division did not come without costs. Division Soldiers were killed and injured in these deployments. Many left their assignment with memories that would haunt them for the rest of their lives. In this captivating anthology, the stories of their sacrifices are captured from personal accounts and from the official records. The reader gains a rare incite into what it takes to be a Soldier in today’s 28th Infantry Division.